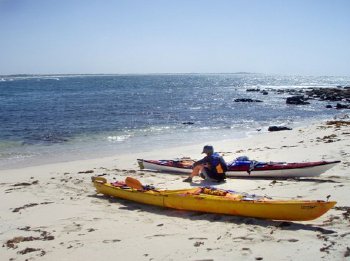 Now there was an idea! Why don’t I join Sandy Robson for part of her south coast adventure? She was planning to paddle from Esperance to Augusta or possibly round to Hamelin Bay. It was to be another piece in her quest to circumnavigate Australia. I didn’t really fancy the full trip and living out of a kayak for four weeks, so I suggested going as far as Albany with her. Val would come down and pick me up, and we would then be able to have a short holiday along the south coast. Matt Erkins was also keen to join her though he had decided to do the full trip.

Sandy would be doing the trip anyway, so it was agreed that we would all be self sufficient, which would give us the option of dropping out without upsetting her plans. She had done an immense amount of planning and preparation for it. Her detailed annotated charts, with aerial photographs from Google Earth of all possible landing/camp spots, were exceptional and a real learning point for me. We put together emergency service contact details, enlisted the help of a range of friends for food drops, accommodation, and assistance should we need it, and Sandy arranged to check in with Les Allen every evening. Les had also loaned me a sat phone.

Sandy had convinced Matt and me to fit sails to help with some of the longer sections. It was an aspect I had long thought about, and now in hindsight I wish I had fitted one earlier. It adds a whole new dimension to kayaking!

We had overheating problems with Matt’s car on the way down to Esperance, which made for a longer and slower journey. It knocked a day of the start while he arranged to get it fixed, but it gave us time to log in with the local sea rescue and do some final bits of preparation. We had an early start after a bit of a slog through the camp site with kayaks and all our gear. We rounded Dempster Head and Observatory Point, paddled past the wind farm on the Ocean Drive and the sparkling white sand dunes of Thirteen Mile Beach and arrived mid afternoon at the secluded and sheltered Butty Harbour Bay. It was a superb spot, unfortunately spoilt by a disgusting, litter filled fishing shack. Matt had had a tough day in the big swell as his boat was feeling particularly unstable. His efforts to keep it upright had put a big weal on his side – he was not at all happy and was talking of dropping out.

Voracious mosquitoes gave us an unpleasant time packing up the next morning. We went out round Butty Head’s small off-shore island as the swell through the gap looked rather too large for comfort. The swell and seas were bigger than the previous day and there were a few bombies around to focus the mind, but at least we had a favorable breeze. Sandy and I were able to use our sails, not so Matt who was still really unhappy with the stability of his boat. We were aiming for Quagi Beach which would provide Matt with road access if he did decide to pull out. I had used my pump intermittently all day, but as we approached our destination I was aware of more water splash on my calves. I thought that carrying the large water bag under my legs was acting as a dam, and preventing water that was coming on board getting to the pump. But there was only a couple of kilometers to go so I would look at things once we landed. Sandy overtook me on the last stretch and I struggled to keep up – was I really that tired? Once we landed the reason for my slow speed was obvious – my kayak was full of water. There was water in every hatch, and ‘Yes’, it had also managed to enter all my dry bags. But it was early afternoon and there was a strategically placed slab of warm rock on the beach to dry things out on. Water had also got into the pump’s battery box which had a melt down. Both terminals being totally dissolved in the evil looking liquid dripping out of it!

Matt did decide to pack in, but he still got up with us the next morning to push us off. He eventually managed to engage the help of an eccentric ‘grey nomad’ to get him back to Esperance. I used two spray decks to stem the water flow into my boat that day, and I also made sure the bung was in the pump outlet. I had been most upset to find that the pump didn’t have a one way valve after all!!

The updated morning weather forecast suggested that winds would be favorable, though Sandy did say that she didn’t usually paddle in the forecasted 3 metre swells. So it looked as though it was going to be an interesting 40+ km day!! The wind was good and we were able to use our sails to great effect. Though we both found ourselves turning sharply out to sea as we caught the sight of some larger sets coming in – exciting! As we approached Munglinup it took a little while to decide which of the three possible beaches we should land on. The bombies and swell made it difficult to see which was the safest. But we got in OK to a rather narrow beach which prompted us to move the tents as the tide came in.

Next day would be a shorter paddle to Starvation Bay, so we managed a lie in until 5 am! It was an interesting paddle as the chart said UNSURVEYED. Again the swell was big and there were plenty of bombies to focus the mind. We passed by three uncharted islands some with seals on them, and then landed on the fourth for lunch. It even had a sandy beach, but no room for camping. Our sails helped us make a quick passage to Starvation Bay and an excellent camping spot, that we had to ourselves. It had a large fixed table with benches and a ‘his and hers’ toilet block. This all proved most welcome as in the end we camped here for three nights. With strong S/SW winds, thunder storms, and 3.5 metre swells forecast over the next few days we stayed put! The evening thunder storms were spectacular but started a number of bush fires that we could clearly see.

On the fourth day, and with a semi favorable forecast of light S/SW winds in the morning picking up to 20 -25 knots in the afternoon, we decided on a very early start to try and beat the wind to Hopetoun. We were up at 3.30 am and checked the updated forecast – no change, so we decided to go. The light from my headtorch just managed to pick out the reflective strip on Sandy’s boat as we headed out into the quiet gloom, and around the rocky spur of Powell Point.

It was to be a 46 km paddle with only a slim chance of a landing at Mason Bay if we could get in through the swell. Initially we made good progress going wide round Mason Point to miss the bombies and intermittent breakers – only 31 km to go. Around 9.30 the wind picked up, considerably earlier than expected, and it became slow progress. At 10.30 we talked about going back, but decide to try it a little longer. At 10.45 with 15 km left to go we agreed to turn back. Almost immediately Sandy said my rudder looked funny, and as I turned round to look at it, it fell off! She stowed it under the deck lines and we set off again. But oh dear, I could only do three or four forward strokes before I needed a big stern rudder to lever the boat back on course. My boat was weather cocking badly and no amount of lean helped the steering, what’s more the rudder strokes just about almost stopped me. After 2 hours of this we rounded Mason Point – 12 km to go, but my shoulder was really starting to ache, and progress was now painfully slow. I was tired and really concerned about the consequences of capsizing. Sandy was also getting cold as she was constantly having to wait for me.

A fishing boat a couple of kilometers out caught my eye, and I decided to head for it. Despite constant paddle waving and a call on the radio we got no response. Sandy tried to see if a tow would help me, but not really. While it did pull me back on course with a jerk, a few more strokes from me and we had a couple of metres of slack. Now if I hadn’t paddled at all, it may have kept things tight. But we were almost at the boat, and soon realized why we had been getting no response. It was an abalone boat and they had a diver down. They kindly agreed to take me and my kayak back to Starvation Bay, once they had done for the day. The diver had quite a surprise when he surfaced to a kayak straddling the rear deck. Sandy paddled back to the bay. We shared our dwindling food supplies that evening and discussed the eventful day.

Matt picked me up the next morning, but with favorable easterly winds Sandy had a quick paddle to Hopetoun. We watched her progress along the coast and met up at Hopetoun. We had two more days of unfavorable winds and sat around getting increasingly bored. Sandy and I decided to go for Point Ann on the third day, for what would have been a 57 km paddle. We got up at 3.30 am started to pack, and then listened to the updated weather forecast. Stronger 25 knot tailwinds and 2.5 meter swells were now forecast for the afternoon. There would be no turning back, and landing could be exciting to say the least. There were bush fires in Fitzgerald National Park so no vehicle access was allowed and we just might be stranded there. So we decided to go back to bed.

Matt and I came home. We dropped Sandy off at Bremer Bay, where she progressed down as far as Riche Point before getting a lift to Albany. After a few days R&R in Albany she set off westward again.[/vc_column_text][/vc_column][vc_column width=”1/2″][vc_column_text]