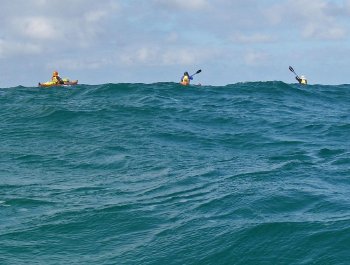 I look forward to the Club’s Jurien Bay long weekend trip because something always happens that makes that particular year’s trip different from others. This year was no exception.

Steve and I arrived at Jurien about 7.30pm and headed straight to the pub for a meal. John Radovich (aka: Rado), Paul Cooper and Alan Hale (aka: Al) had arrived earlier and were set up for a good night’s rest. Regrettably the Poms next door (actually Scots) were not. They were determined to enjoy themselves into the wee hours of the morning. Paul, a very patient person threw the towel in at 12.30am and spoke to them “ ^*&##*!!!”.
They very promptly apologised and as promptly continued on their partying way. This finally ceased at 2.30am.

Following brekky and strictly observing “Gentleman’s Hours” we promptly launched at 9.30am. We all loosened up paddling to Boullanger where we explored its embayments and Western Reef area. Al and Steve had a quick surf on the reef area, where Al was hit and capsized. That didn’t look good but he did finish off with a successful roll. With winds forecast to 20 knots, we were determined to land at Escape Island. We paddled to the exposed southern end of Escape to find a small landable beach, but with conditions building all agreed a launch from that spot might be tricky business. We promptly paddled to the northern lee side where a safe sandy beach was found for a lunch stop. Following lunch and a brief surf and play it was off to Hill River for the night’s camp. Conditions were ideal with very clear warm water, blue skies and a 12knot beam wind.
About 2km south of Escape we did some practise rescue drills, rolling and assisted re-entry. The thought being always practise in waters and conditions you are likely to paddle in. Loaded boats were successfully rolled; indeed Paul embarrassed us all making his roll look too easy!. Steve opted for a wet exit which gave us the opportunity to practise emptying the flooded cockpit of a loaded boat. It took two support boats to accomplish the task. It was hard work but good practise.

By this time the day’s temperature was high which prompted Rado to suggest camping in the treed beach area opposite Essex Rocks because there would be no shade at Hill River. We immediately altered course.

Once tents were pitched everyone retired to the shade for a cuppa, nibbles and stories that included the usual exaggerations. The company was excellent, the shade very welcome. The occasional bull ants not so welcome! Everyone slept soundly, which was just as well with what was to follow the next night.

With conditions building and Essex Rocks only 4km away, we set off in manageable wind and wave. We paddled an off-set course allowing for wind and about 3km out we stopped to assist Steve who was having trouble with his foot rest. Paul and I supported his boat while he put his head down to make adjustments. I take my hat off to anyone who can do that in a bumpy sea and not throw-up!

The approach to Essex Rocks is interesting because there is a rock formation that resembles a submarine wreck. You will paddle to within 50 metres before realising what it actually is! Have a close look at the photos to find the ‘finger’ rock directly behind the ‘submarine wreck’. It conveys an interesting message from Mother Nature.

Essex Rocks rewarded us with 1.5m breakers, picturesque reef conditions, good surf rides and a very swift current running about the reef to practise in. Steve took a tumble in the current that runs over reef in very shallow water.

He failed to rol l- something to do with his helmeted head bouncing along the reef bottom. Holding his boat in one hand and my bow in the other, we drifted into less turbulent waters where a text book bow rescue was executed.

With the thought of strong afternoon winds we headed to the northern end of Essex Rocks for a rest stop before tackling the short but menacing passage to the safety of Boullanger Island.

Al was in the lead and paddled around to the lee side of Essex to be greeted by over 20 of the friendliest seals you have ever met. Without doubt the best ‘seal reception’ ever!! These guys swam close-in around boats, bumped into boats, mouthed paddle blades and just plain skylarked all over the place. Mind you we did not lose sight of the two BIG boys on the beach. On top of all that we also practised bracing into beam surf and some play ourselves. It was hard to leave our new mates but the thought of strong afternoon winds prompted our departure.

The passage to Boullanger is only 1.5km but we had to dodge ‘steam train surf’ all the way. I recall looking to my seaward side to see Paul brace into a cresting wave. Approaching Boullanger, Rado was surfing, took a tumble and rolled up that fast I wasn’t sure he capsized in the first place!

We all enjoyed the lunch stop at Boullanger.

The paddle to Favourite Island was as predicted with a strong following sea. The route past Boiler and Harper Reefs was thankfully restricted to large lumpy swells. Al demonstrated good boat control in these conditions with his ‘packed high rise’ stern, together with no rudder or skeg.

Once landed at Favourite Island the wind was over 20 knots and strengthening. A radio call to Jurien Sea Rescue confirmed SW winds 20- 30 knots and strong wind warning issued. Monday’s weather being SE/SW 15-20 knots early morning rising to 20-30 knots later that morning .. … What to do!!

After discussing options and consequences, the group decided to camp overnight on Favourite. Jurien Sea Rescue were advised and we started looking for sheltered tent sites. A task easier said than done!!

The island is basically elevated rock about 250 metres length with a very exposed undulating top littered with deserted bird nests, patchy low scrub and some very nasty ‘blow holes’ in the making. A fall into one of those would result in serious injury. There is a large tidal sand spit at the eastern end of the island. We camped in different possies on the sand spit at the base of the island rock. The wind was now really strong with sand blowing and swirling from every direction. Boats were pulled up as high and dry as possible and we settled in for the night watching the tidal surge form mini lakes in front of us. One surge got to 2.5 metres from a tent.

No one slept well – the partying Scots at the caravan park we thought were bad enough but were no comparison to the noise the birds on Favourite made ALL night long and to the continual sand blasting we took.

Word was out and travelled through the camp like wildfire- “We sail at dawn”. If we were to get off the island we had to take advantage of the morning forecast winds. Everyone was up and packing at 5.00am. We were under way before dawn and luckily for us the wind had died back making for an easy paddle back.

Once on terra-firma, Al and Paul headed for the showers while Rado, Steve and I made for the beach café for breakfast. Ahh, the aroma of scrambled eggs and fresh coffee at dawn- excellent!!

• Carry a radio and never be hesitant to use it.
• Check your footrests, rudder, back band and other adjustments before every launch.
• Steve’s paddle shoes stink.
• Have another paddler check your boat immediately prior to launch. They may find something you’ve missed.
• Webbing stretches when wet. You may need to allow for that.
• Carefully check hatch covers are seated correctly.
• The seals at Essex Rocks are very social.
• The birds on Favourite Island are very noisy.
• Enjoy the your paddling experience and at times its solitude. But be aware not to paddle too far from the main group. Keep within communicating distance, you may be needed to assist in an emergency.
• Sails are great.
• The practise you do will help yourself and others in an emergency one day.
• Carry a repair kit for your boat and tent.
• Thanks to Al, Paul, Steve and Rado for their contribution that made this a great paddle.

Conclusion:
A terrific Jurien paddle! Good to challenging weather conditions, excellent camaraderie, thrills, spills, rescues and those seals. A trip that had something for everyone. I’ll be there next year! Al and his mates at Essex Rocks – photo Rod