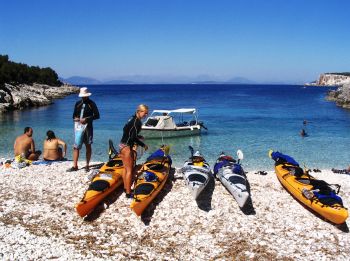 I was lucky enough to have a friend who, after selling his house for quite a lot of money decided to shout half a dozen friends the air fare to any destination in the world. Where would I go? The Arctic had always interested me but I felt the cost of that trip might end our friendship. I had paddled in Canada last year so for a change in continent I chose Greece. I had always been interested in Greek Mythology and the return journey of Odysseus from Troy to Ithaca had stayed in my imagination-so a sea kayak trip in that area was one of my choices. I went on the web and found a group called Monte-Nero activities and proceeded to look for a trip in the Ionian group of Islands. I settled on the trip around part of Kefallonia and the island of Ithaca or Ithaki. First time in an area it’s often best to go with a company as you learn the pitfalls and rules associated with paddling in that area and also how easy it is to camp or to hire kayaks.
The other trip that interested me was the trip in the Aegean Sea from the island of Milos to Santorini. The trip is for more experienced kayakers like us as it has 20 km. Crossings and at time it can have very strong winds. Having only recently paddled at Dirk Hartog with 3 consecutive big wind days I elected the more protected area in the Ionian Islands.

I am not going to give a day to day description but can definitely describe it as one of the greatest holidays I have ever had. The weather was hot, the sea was brilliant blue and perfect for swimming and snorkelling, the trip leader was friendly and professional and the fellow paddlers younger than me (not difficult) and wonderful company. A husband and wife from Denmark, a German fellow and a Swiss German guy. Fortunately, we all shared a love of beer, wine and good food.

We visited small fishing harbours and stayed in small tavernas and we also camped on deserted beaches (mainly small pebbles).The small boat accompanying us carried tables and chairs, tents, thick sleeping mats and delicious foods. Somehow, the Greek salads in Greece taste so much better. One of the things I really liked was the fact we had no flies and only a few mosquitos. Yes-we did have the odd wasp wanting to share our food but not having to wave your hand around your face or cough out the odd fly that always seems to find the mouth, was heaven.

The actual paddling was easy and I really had to slow my stroke down. I have spent so much time trying to keep up with men in Perth that as soon as I hit the water I become frenetic. It was great to ease along and explore the wonderful caves and look at the amazing cliff faces that characterize the beautiful Ionian islands. I say the paddling was easy but we did have a couple of days in the middle of our 8 day trip when the wind came up and flew down the mountainside and sped along between two islands to give us a really difficult time. Along with one swim to Rottnest accompanying a paddler I did in over 25 knots, this was similar. The wind was side on and so you had to lean well over to prevent the kayak from tipping—it was hugely strong and the force of the wind waves was great. Other members of the group thought they were big waves but—no—they were not like our big waves that build up over great distances. I kept quiet though because it sounds sort of arrogant to say “you should see our waves at home sometimes”.

It was fantastic to be able to practice rolling in the warm water and to practice rescues. I must say they were pretty impressed with my re-entry roll. (Wait till I perfect the hand roll next summer.) Our trip leader, Pavlos (of course that would be his name), gained his certification in Britain and so had a bias to the British way of doing things. I still can’t figure out why you have to push off with your paddle in one hand and other hand on the sand when you take off from the beach. We used Prion kayaks which seem to be popular over there but I was pleased I took my Werner paddle with me. It did cause a few glances my way in airports and one man even asked me if it was a machine gun?

Was it better than paddling around Rottnest? I would have to say no. I love the pristine waters we have with the abundant marine life and the variation we have with our big swells and then the crystal clear see-through waters on the outside of Garden Island.

Don’t get me wrong, it was a wonderful holiday and the waters are the bluest I have ever seen but I think they have fished the Mediterranean to death. We did see small fish when snorkelling and the small dolphin that inhabits that region but nothing compares to our stingrays, dugongs and sharks that cruise by us here in WA on occasions or our wonderful large dolphins and whales. Lets keep it pristine.