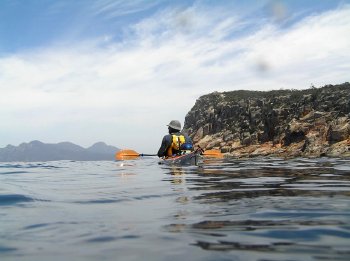 Anyone that has met me would have probably heard me “banging” on about an impending trip to Tasmania. Well the time finally came in January of this year and it really lived up to expectations.

Since reading an article in Australian Geo many years ago, it has always been a dream to do an extended trip by kayak and when my mate, Jason Gibbs, mentioned that he wanted to see the coast of Tassie, it just begged to be done by kayak. Initial planning began in 2007 and after a zillion emails, large phone bills (Jason lives in NSW) and what seemed like endless purchases we hit the water on 21st of January, this year.

Our initial plan was to launch on the Tamar River at a place called Low Head, paddle out the mouth and around the point, keep Tasmania on the right and see if we could make Hobart in 3 weeks. Seemed relatively simple however, Tassie’s notoriously fickle Bass Strait had other plans for us.

Setting off from Low Head late in the afternoon, we had planned on getting 10 kilometres under our keels and a bit of distance from civilisation before making our first camp. Within 100 metres of the mouth of the river, I had had three waves break over me, and the wind, now that we weren’t in sheltered waters, made its presence very well known. We made all of five kilometres and to be camping that night under the light of the Low Head lighthouse was a tad demoralising. The following day however, promised light winds in the morning with strengthening winds throughout the day. This was pretty much the weather pattern for the entire trip. The afternoon winds seemed to be either of the storm or gale force variety.

We put in a reasonable effort the next day making about 25 kilometres before the winds became ridiculous, and we ended up in Beechford. There we languished for the next 4 days! The winds were well over 30 knots and the ocean looked like a washing machine, day after day. When we did finally get away, we managed some 50 odd kilometres to Bridport. Weather forecasts again looked dodgy, with extended non-paddling weather, limited fresh water availability and with the critical Banks Strait to negotiate, it was then that we made the decision to pull out and start again from Bicheno. We had already lost many paddling days and the prospect of losing more and missing some of the East Coast sights forced the change of plans.

From Bicheno on however, we were much more fortunate with the weather. From Bicheno we paddled to Wineglass Bay, then around Freycinet Peninsular to Cooks Beach, over to Crockett’s Bay on Schouten Island, past Isle de Phoque to Maria Island, crossed Mercury Passage to Dunalley, then to Lime Bay, Blackman’s Point and then finally Wedge Bay. White Beach Caravan Park in Wedge Bay was the end of the line for our trip.

At Cooks Beach, Schouten and Maria Islands, we camped for extended periods to do some of the walks or simply to rest. Some of the highlights were climbing Mt Graham (579m) and Bear Mountain (approx 300m). The views from both were simply stunning and well worth the hard, hot slogs to the top.

On a trip as long as this, there isn’t enough space to relate all the memorable moments. There were some times however, that will stay forever in the memory banks. One such time was when we were crossing Mercury Passage, between Maria Island and Dunalley. My forward stroke had gone astray at some stage during the trip up to this point, and after 3 hours in the saddle, I was knackered. I was sitting in the middle of the Passage coming to grips with the realisation that the only way the pain would end, was to pick up the paddle, with arms that felt like lead weights, make more pain and continue on. Sitting there trying to summon the energy before the weather turned, in the fast approaching afternoon, I realised that what I needed was a distraction. Almost on cue I was surrounded by dolphins that played for at least 10 minutes. It was just the break and diversion that I needed and the next 2 hours passed quickly.

Another great memory was of our fishing exploits. We had wanted to catch fish along the way to supplement our carbohydrate heavy diet. Unfortunately, our fishing skills did not provide more than a single pike each. That night, the two great white hunters planned a fish curry with potatoes and coconut cream. After cooking everything up we knew we were in trouble when the potatoes were bristling with bones!! Needless to say, we were not very impressed, so from then on our efforts went into green lip abalone and mussels. We had some fantastic meals after that.

Something that will be really hard to forget was the feeling we had when crossing between Schouten Island and Maria Island. Our plan had been to call in at Isle de Phoque along the way. We knew it was just an overgrown rock and that their would be no hope of getting out and stretching the legs, but we did think that we might have been able to get in the lee of the island and just have lunch out of the wind. Talking to a yachtie the night before departing Schouten Island, we found out that our plan had a flaw. The rock is home to a large seal colony and some very large sharks that evidently do laps waiting for a seal to fall off the island. We did not fancy becoming another statistic for 2009 (the sharks had a very high profile summer this year) so we intended giving the Isle a very wide berth by paddling closer to the Tassie mainland. As luck wouldn’t have it, the wind and currents were in cahouts and we passed well within a kilometer of the rock, all the time hearing the theme to Jaws in our heads.

If anyone has ever thought of wetting a paddle in Tassie, I can strongly recommend it. The people are very friendly and helpful, the fresh produce mind blowing (especially after weeks of pasta and porridge) and the scenery oh so worth it. Beware, the water is very cold but beautifully clear, and conditions can change very quickly. It definitely pays to have a relaxed schedule and a flexible approach. We ended up with numerous side adventures as a result which only enriched the entire experience. Some friendly fins in Mercury Passage Bart and Jason, the two hairy mates at the end of the trip In behind the Nuggets The view from Mt Graham Abalone, a bit bigger than in WA