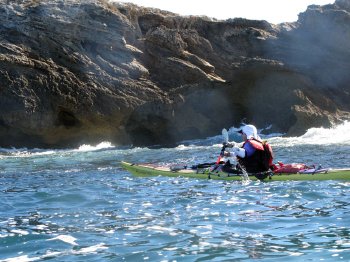 The week did not start well!

The weather forecast leading up to Sunday, 19 April was not looking good. The predicted conditions were near calm. I now regard calm as a four-letter word. I was wishing for 15-20 knot winds and come 6.00am Sunday morning I was still hopeful … perhaps a miracle.
The day was a dreaded 4 knot breeze, glassy seas and clear blue skies- so much for my miracle!

I arrived at the west Cape Peron Car Park at 7.50am, certainly time enough to beat others there.

It looked like the Sea Kayak Club had booked the entire car park, only one solitary bay remaining and it was mine. On the other side of things what a fabulous turnout – 17 paddlers. It was very pleasing to see such a widespread of experience present.

The prelaunch brief was a little longer than usual and did include on-water signals. In particular whistle blasts, 1-for ‘stop’, 2- for ‘Go’ and 5-blasts for a genuine emergency. The latter would regretfully play a part later during the morning.

When we did hit the water it was in anything but rough conditions, however, there was a very nice half metre swell running and everyone was in fine stroking form.

The paddle armada was divided into three groups of 5 paddlers with Rado, the roving photographer, and myself commuting between groups. Group leaders swapped positions at the end of every leg to give all the opportunity of leadership and on-water communication. Effective communication was a challenge even in these near ideal conditions.

The first destination was a 2.5km leg to Collie Head at Garden Island. The armada paddled in a 3-group arrowhead formation. A total of 17 sea kayaks made an impressive sight, all 3 sub-groups held their formation well. From Collie Head next stop was South West Point, paddling in near breaking and surging waves as close to the cliff line as individuals felt was safe for them.

Close to South Hill we decided to land. Each paddle group would organize its own surf landing. All was proceeding in a usual manner leaving just Rado and myself to land. We both approached the beach and about to proceed further when we heard one whistle blast (stop), a second blast (go) immediately followed by 3,4 &5 blasts. Something was wrong!

We immediately landed to be told Mark had dislocated his shoulder whilst landing. Grabbing First Aid kits, VHF Radio and mobile phone, we ran along the beach to find Mark already being attended to. He was in good spirits with some discomfort and I suspect perhaps annoyed with himself.

At times no matter what care you take, some things just happen. When they do it’s usually where prior training and practice comes into play. That was to very case in this situation.
Marks’ condition was assessed, he was assisted to a comfortable position with his arm supported.

It was now onto the radio to call up assistance from Rockingham Sea Rescue, who arranged for a Ranger from Garden Island to evacuate Mark by 4WD to the mainland. President Judy accompanied Mark to a waiting ambulance.

Back on the beach Group members were preparing Mark and Judy’s boats for towing to our launch site, approximately a 9km paddle. Fortunately a lone fisherman nearby was monitoring his radio, recognized our predicament and assisted taking Mark’s heavy boat on board. Our thanks go that fisherman. Brighty towed Judy’s boat, well done Bob.

The paddle was aborted and all paddlers returned safely to the launch site. Some of us found our way to Café Jane’s home for a ‘feet-up’ late-ish lunch. Thank you Jane.

As Co-ordinator for the day I would like to thank all paddlers for the roles they played.

There is no doubt that the Club’s training days are of huge benefit. Mark being attended by Martin and Jo. – photo John Radovich