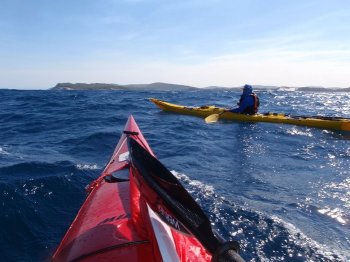 From tales told to Di Bramley (scribed around the campfire, with all care but no responsibility taken for its accuracy).

Following Gentlemen’s hours, and much careful preparation of packing for an overnight sea kayak excursion, Friday’s paddle finally set off at 11am. Weather was clear and sunny, light winds. Wayne, Rod, Paul, Alan, Jim, Tim, Glen paddled across the calm waters of Nornalup Inlet heading for the Southern Ocean. Camping destination would be determined by finding a suitable cove and landing. “We set off from the beach in light to medium winds and calm sea and made a lunch break at the ocean mouth on a lovely sandy beach. The wind had been gradually picking up and when we left, the ocean had white caps and a freshening breeze. We picked a sighting point on Rame Head and began paddling steadily.”

However, “The state of the sea overtook our expectations. We had paddled hard for about 2 hours but the wind didn’t allow the planned excursion to proceed. We got close to half way but the going was tough. We were heading into strong winds and a medium chop and it was decided it wasn’t worth the effort. The decision was made to turn back. Coming back we picked up a surf break at the Inlet mouth. Back at the sandy beach, some ate, one walked, one swam and some surfed. Alan got cleaned up by the surf twice. Tim took a mammoth swim (accidentally minus his kayak), of 300 metres, with Rod shouting “encouragement” from the sidelines.”

They arrived back at camp, not unhappy about sleeping in a warm soft bed instead of on a hard bed on a cold, wind lashed shore.
Saturday saw groups taking off in various directions.

Rod, Caroline, Jim and Di biked along part of the Bibbulmun Track to Walpole . Di crashed, as she tried to emulate Rod’s graceful sharp turn onto the pedestrian pavement (the bruise was impressive). Steve and Leonie opted to paddle up the river at Nornalup.

A smaller but dedicated group of intrepid sea kayakers, Alan, Tim, Wayne and Paul once again set out of the Inlet. “We intended to check out Saddle Island, and do some fishing on the way. Again, we were beaten back by massive winds, gnarly Southern Ocean seas , swells and wind gusts up to 30 knots. The waves were higher than the kayaks were long. We beached and walked to Shelly Beach where we measured winds of 30 knots with Paul’s German anemometer. This beach would not be a suitable landing spot, only for crash landing. We arrived back at camp tired and stuffed.”

Easter Sunday, paddlers were woken early by the excited squeals of children chasing 2 big pink bunnies who were throwing Easter eggs. Leonie scored 3 but her caring conscience persuaded her to give them to a crying child, who ran off without a backward glance.
After a leisurely breakfast, (Gentleman’s hours have been upgraded to Gentlemen’s Code with an “Event based timing system. Refer to Wayne for clarification), the group sorted out the logistics of a trip to Nornalup. Nine o’clock start time was decided to slot in morning tea at Nornalup.

The group paddled up the Inlet to Nornalup, fishing and surfing. Paul’s sail known as “the cone”, caught a gust of wind and he was in full flight. Unfortunately the wind dropped off and Paul’s sail fell over his head, enveloping him in a “cone of silence”. This was witnessed by many, as he was by now 100 meters in front. “Is he alright?” a passing boater inquired, not quite sure what he was seeing, a white cone with black arms paddling furiously. “I was back winded.” said Paul later that night, unperturbed by all the ribbing. Wayne darkly commented “That paddle was like paddling in wet cement.”

After 8 km of heavy paddling the Nornalup Boat ramp and beckoning tea rooms were a welcome stop. Steve, Leonie, Di joined in the 4.5 km River paddle . Caroline stayed on the river bank, sketching the magnificent trees.

We paddled gently upstream bathed in sunlight ,along the convoluted, placid waters, bordered by hills of tall tingle and gums. Beautiful country, as the plaque at Monastery Landing proclaimed. James Mitchell declared the land along the river an A Class Reserve. But Rod and Paul had seen enough tall trees after only 500 meters. “We were looking for some bump and scrape”… pardon?? Rod subsequently became comatose and fell behind out of sight. All worried about him and Jim turned back to find him . There he was, half a km down river, asleep at the paddle. Attempting to get Rod to step up the pace, Jim raced off with concentrated paddling strokes but was abruptly stopped by a log collecting him across the chest. Now alert, Rod then assisted Jim.

Tim and Wayne sighted a tiger snake swimming across their bow and headed for the bank to check it out as it rested in the reeds. No one was keen on falling in the river after that. We paddled on, reaching an area where a tree had fallen across, blocking access. Some nimble limbo antics were performed by Jim, Steve and Tim while the hungry paddlers abandoned them and went back to Monastery Landing for lunch. Steep sides prevented ground exits so a system of multilevel valet parking accommodated some of the boats. Seven craft on a 6′ by 6′ jetty was difficult and it ended up with some boats strung together like washing hanging along the bank. The manoeuvre took at least 20 minutes.

Rod and Paul, unable to sit and wait for their turn to tie up, went back to Nornalup boat ramp. Rod was in for a surprise which Caroline could see happening but could not prevent, choosing instead to take note of the various colours of the women’s saris. Rod said, “We positioned ourselves for a calm exit and were rudely startled by a reverse attack of Indians in a Canadian canoe, Paul almost being t-boned”.

Wayne was having his own close contact with some tourists in another boat. “Ver are not frum round zees parts. Tell us pleese “Is zis ze Franklin River?” “Yes”, Wayne “ But you must keep between the red and green markers”. He was greeted by blank stares. He tried speaking in French but their French was not as good as Wayne’s. He resorted to hand signals. Later that night, when quizzed about the couple, Wayne had a vague idea of what the fellow looked like but was able to give a detailed description of the blond, blue eyed frauline. This would explain why he spent so much time trying to explain river etiquette.

After another coffee break at the tearooms, all the men raced down river to the river mouth. “I shall Hoon down the river”, boasted Tim. ”I shall zip by you all”, said Paul. A flurry of kite, sails and the cone and they were off for home.

It is significant to note that the 2 senior citizens in the group flogged them all (and are also entitled to free public transport now!). “We re-grouped at the river mouth for the paddle across the estuary, a 12 to 15 knot wind behind us, low choppy seas running in front”. Tim helped Jim to get the kite flying and Steve rafted up with Jim to make use of the pulling power. Tim collected 2 cling-ons, Rod and Wayne to take advantage of the sail but Paul, unassisted, inside his cone of silence, powered forward stealthily gaining on Alan who was under paddle power.

When the cling-ons broke free it was a mad scramble to the beach, but no one was going faster than the waves. There was no cheer squad to greet them. The wild conditions had driven Di, Caroline and Leonie back to the comfort of the campfire.

On Monday as the group broke camp the weather was glorious, the inlet waters flat glassy blue, no wind, perfect conditions for a great overnight sea kayak excursion.
HEY! COME BACK!!! Getting ready to head out of the inlet. Wayne at the inlet mouth. A quick lunch before heading out. Glen on the return. Wayne going out for a look in 15kt plus winds. Wayne and Paul on Shelly beach taking a wind reading. Tiger snake we saw swimming across the river. Wayne and Rod (bored) in the Frankland river.