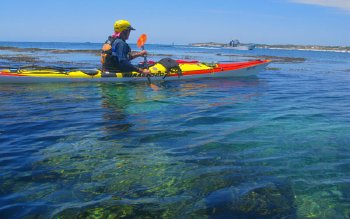 I was looking forward to the Rotto trip and wasn’t disappointed.  There were 11 of us staying at the wonderful house at Kingston overlooking the ocean – Jim and Di Bramley, Rod and Carolyn Coogan, Steve Foreman, Judy Blight, Helen Cooksey, Pel Turner, John Radovich, Dave Oakley and myself. Rob McCracken stayed at the Lodge and had a romantic weekend away with his girlfriend Peta.

Rod, John, Rob, Dave, Jim and Steve left Beach Street Groyne about 8.30am on the Friday morning in what I was told to be quite an uneventful paddle over with some headwind. The swell and wind were not as high as had been predicted. The rest of us caught the ferry over and we all met up at a café on the beach for some lunch before paddling over to the house. I am told that Rob listened to Metallica on his Ipod on the paddle to Rottnest and to Beethoven on the paddle back to Perth – what a contrast!

Although not the official start of schoolies there were several “party” boats of leavers with their music blaring and Judy paddled past one of those that was moored near the house to ask how long they were staying there.  As she paddled off someone threw a tennis ball and it hit Judy in the head. Judy, as you could imagine, raced back over to the boat and gave them a right dressing down.  I had visions that we would find our kayaks vandalised the next day or missing as they had been set out to sea by the disgruntled schoolies but fortunately they moved on before nightfall!

Whilst having a wine or 2 Rod was discussing emergency radio call procedure with a few of the paddlers. Helen thought she would get some practise and did a distress call only to be reminded (very quickly) that she was actually on air. She quickly got back on the radio to let anyone know that was listening that was just a test call!

That evening we cooked up a BBQ, salad and Pel made his yummy Bean Salad & Di cooked up some damper which went down a treat.

The snorers (no names mentioned – Pel and Steve) were made to sleep on the verandah and we thought it was them we could hear that night however unbeknown to us another snorer  (initials JR) was in the lounge room – right next to the girls’ room. Helen had the right idea with her ear plugs in and didn’t hear a thing.

We woke up to a beautiful morning on Saturday.  A funny thing happened as Judy was standing outside the kitchen – a bird fell on her head and landed on the floor.  It was still lying there 5 minutes after so we were a bit worried about it but it must have just been stunned and eventually flew off.  Judy, what is this attraction your head – tennis balls and birds?

After breakfast we got set to head off on our clockwise circumnavigation of the island. Rod being the trip leader was giving us a reminder of signals for when we were out on the water and Judy and he nearly came to blows over what was the correct “come to me” signal.  Hence Pel named them Punch and Judy.  Conditions could not have been better with small 1-1.5m swell and light SE winds which turned SW later in the day. The water was stunningly clear and blue. Not long into the paddle Judy spotted a turtle – well so she says but as she was the only one to see it, it can’t be confirmed.  It may have been a hallucination from the earlier concussion with the bird.

The most challenging part of the paddle was around West End but even for the less experienced of us it was not really a problem. After rounding West End we paddled in to the first bay and there were half a dozen seals resting in the water with their flippers sticking up above the water sunning themselves.  Then we paddled on to the next bay we saw some fins – was it a shark, dolphin or whale?  We decided it was either a large dolphin or a small whale.  In fact there were a few of them to greet us as we paddled in to Eagle Bay where we had a lovely relaxing lunchbreak.  While there some inquisitive lizards were trying to partake of Rod’s lunch. From Eagle Bay we had the wind behind us and those with sails took the opportunity of using them. Jim pulled out a kite and after a lot of getting the string caught around his boat managed to get the kite up flying and used it like a sail to assist him along.  Those of use without the sails just had to paddle harder and keep up with muscle power. On passing Catherine Bay we heard someone calling out.  It was Rob who had taken the day off to spend with Peta and they had been bussing around the island getting off at many of the beautiful bays along the way.

Just out from Thomson’s bay there is normally a nice surf break (which my hubby says is called Transits) so Jim, Rod, Dave and I headed over to do some surfing.  It was not breaking consistently but enough to have some fun.  I was trying to learn from the masters but have a long way to go!

While we were out on the water – Di and Carolyn had cycled out to West End taking photos hoping to catch a nice shot or 2 to sketch or paint. They had rather sore butts by the end of the day but thoroughly enjoyed themselves.

Rob and Peta joined us late in the arvo and we settled on the verandah for some sundowner drinkies.  Did I mention the view from that verandah – ah the serenity! Another BBQ that evening and some more of Pel’s famous bean salad.  Di surprised us with some yummy scones for dessert.

That evening Steve and Dave played Tumbledown to settle a disagreement regarding the navigation over to Rottnest – I believe Dave won and had pleasure drawing the pine trees on the block.

I took the opportunity to bring out my new log book to see if I could work on Rod for a few sign-offs in my assessment record toward the new Intermediate Skills level (what is the intermediate skills again!?!?!?).  Rod however is a hard taskmaster and only signed me off on one item – paddling at a speed of 5km for 90 mins.

During our stay we had a rogue quokka that kept sneaking in through our barricades. People were sweeping it out (gently) with a broom and scooping it out with a paddle – it always found a way to get back in again – I wonder if it is called Houdini?

We woke up to another perfect day on Sunday.  It was decided that we would aim to leave about 10am to let the SE wind die off a bit. We packed our gear in to our kayaks and Carolyn and Di very kindly cleaned up in the house.  You girls are stars – I hope Rod and Jim know how lucky they are. While we were waiting Rado decided to do some artwork on Rod and Jim’s faces with his multi coloured Zinc.  Jim ended up with makeup looking like the lead singer of KISS – and paddled back to Cottesloe like that.  Rado could get a job doing kids face painting at festivals – he was so good at it.

Rob paddled around and met us about 10am and the girls waved the 12 of us paddlers off as we set off into the wild blue yonder.  Actually it was beautiful conditions for most of the paddle back to Cottesloe with again only 1-1.5m swell and light SE winds which turned SW mid paddle.  I couldn’t believe how clear the Perth coastline was the whole paddle back. It made you feel closer to the shore than you actually were.  We were meant to be heading slightly over to Freo way so that when the SW winds came in we could ride the swell back in to Cottesloe.  Not sure quite where we went wrong but the last part of the paddle was spent with the wind& waves side on – that’s what happens when you listen to the boys! We took about 3hrs to get back which was great timing.

Thanks to all for the great time and laughs had over the 3 days. It was great to get to know you all better. Rod over reef on the north side – photo John Radovich Pel, Helen, Jim and Dave on the way back to the mainland – photo John Radovich