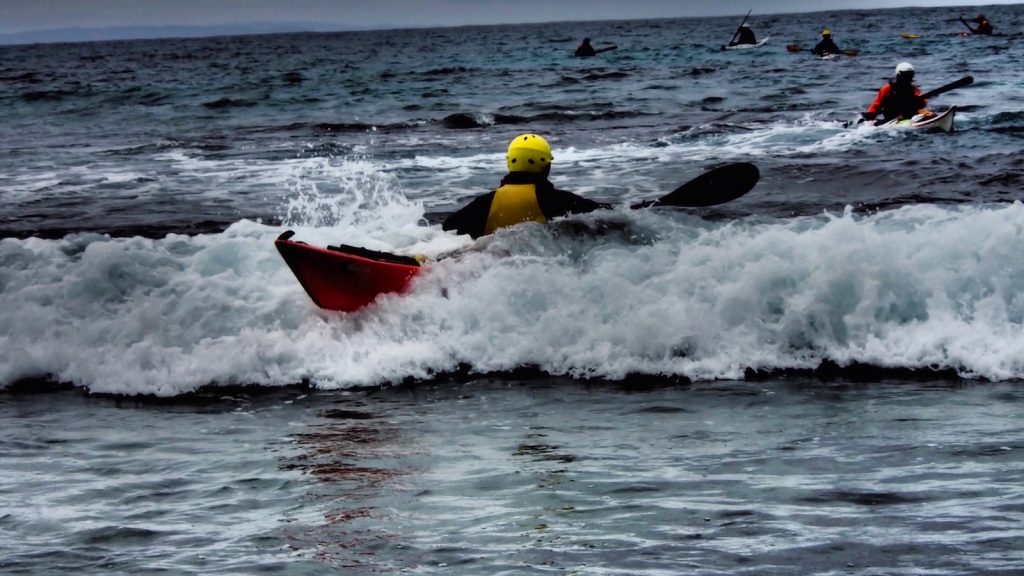 As a part of the SKCWA reinvigorating its leadership group, Les Allan offered to run an Instructors course on the south coast over the period Wednesday 20 to Sunday 24 January.

The course was designed to evaluate the instructor’s personal sea kayaking skills, to develop teaching techniques and  to develop an ISSA course  to be delivered on  Saturday and Sunday.

Les and Jenni had been busy the week before hosting a WOWOW paddle for female paddlers. No sooner had the dust settled on the driveway from the departing WOWOWers when we all rocked up. Les and Jenni kindly allowed us to camp in their back yard which was a great way to keep people together and chatting about all things kayaking.

Steve Haddon, Jill Sievenpier, Tony Beswick, Chris Mawson, Damon Haddon, Bruce Pilgrim and Andrew Burkhill all put their hands up to attend. It was an intensive course, with Les taking us through our paces in the three days leading up to the ISSA course. The trainees had to prepare the lesson plans for the course after a full day on the water. Les had an idea for a far more adventurous course which put some out of the instructors outside their comfort zone, however with time on the water and gaining understanding and confidence of the location, everyone become more comfortable with Les’s suggestions.

The training for both instructors and ISSA students was held at Parrys Beach about 20 kms west of Denmark. The bay has a shallow sandy beach creating a spilling wave to break toward the shoreline, a great training ground for  ISSA to learn the art of low bracing in surf.  Deeper water behind the beach allowed rescues and strokes to be taught in the relative calm. A little further up the beach the waves got a bit bigger and some reasonable surf presented itself for the instructors to practice capsize and rolling in surf.

The instructors got to play around Stanley island which sits offshore and provides great rebound and a bit of lump and bmp. Les had us paddling backwards in lumpy conditions which was interesting and doing rescues in some swell and rebound. Something hard to find in Perth at this time of year!  Re-enter and rolls were practiced with instructors having to paddle about 600 metres back to safe waters with flooded boats in the swell and rebound. This was a challenging exercise as the boat’s stability decreased and having a paddle in the water was the way to provide support. This caused group spread as instructors concentrated on paddling forwards to maintain stability.

As everyone pumped out their boats, Andrew Burkhill found that he could not keep the water out and that no matter what he did, he was continually awash. We started to understand what was going on when the front of his boat had a distinct downward presentation. Andrews front hatch had flooded and the boat was no longer buoyant. A tow was applied and Les and Damon, came alongside to clip Andrew’s decklines to theirs and now at least Andrew would not sink. Luckily the rear compartment still had some air in it so it stayed buoyant. The tow was for about 1.5km where we found a beach without a bad break. Andrew was released from the tow and paddled himself in with his bow pointing very much down. He did a great job of getting ashore where Les and Damon assisted in getting the water out. It appears the sealant on the bulkheads (it’s a polyethylene boat ) had failed and water had flowed from the cockpit to the front tank and the day hatch behind the cockpit. There was some water in the rear hatch but not enough to cause trouble. After seeing this event, I might get some air bags for my boat as a fibreglass boat will definitely sink should the same thing occur.

Friday was spent at Cosy Corner where Les shared his teaching techniques honed over many years of instruction and demonstrated how different strokes could be presented the next day. Perhaps I was distracted but the colours of the water and granite where so beautiful as the sun came out , making the little bay we sat in look enchanting.

Saturday was day one of the ISSA course with 14 students in total. Colin Millar, Mark Stallbaum, Jimmy Henley-Martin and Taneesha Stallbaum  and Sharryn Murry had driven down from Perth for the weekend joining 10 paddlers from Albany/ Denmark.

The morning saw 3 groups practice surf launches and landings, bracing in the spilling surf, and if the waves were not there, the instructors tossed the boats about to crank up the bracing skills.  Paddle skills were practiced beyond the break. The groups rotated through each station getting about 40 minutes practice at each station.

The afternoon was all about getting wet as the students now paddled parallel to the breaking waves applying the bracing skills of the morning. Then in bigger waves they had to capsize and swim their boat to shore. Meanwhile a second group was out the back practicing T rescues, heel hook recoveries and towing.

It was a full day and all of the instructors worked really hard to give a fantastic learning experience to the students. I’m sure all would have slept soundly that night.

Sunday was a short paddle of 10km heading into the bay on the way to Stanley Island. Les was keen for a big swell to give some excitement but the gods did not prevail but they did send in some wind. Capsizes, assisted rescues, and towing were practiced. The ISSA  students were given an opportunity to meander through some rock gardens, applying the turning skills they had been learnt on Saturday. Some of the Albany people made tow bags on Saturday evening as we mulled over the day’s events hoping that Sunday would present a chance to use them for the first time.

I think the instructor course with the delivery of an ISSA program was a huge success. It was a lot of hard work for the instructors, who were kept busy all through the day and evening.  Our bed times got earlier and earlier as the days wore on and was a measure of how hard everyone was working.

I was very impressed by the course presented by the instructors  for the Saturday. Its execution was excellent. I was amazed at the way the ISSA students quickly gained the skills and applied them to the surf and waves. Sunday was an opportunity to apply all that was learnt on Saturday and use it in a real paddling scenario. From what I saw, everyone was having fun which is what sea kayaking should be about.

Thanks must go to our trainee instructors, who made a huge commitment to give up 5 days of their lives to benefit our club. Thanks to Les Allen for running the course, Les has been a real driving force to get this off the ground.  I think all the instructors became more confident from this course and Les loves to challenge people. I saw our trainee instructors stand up and extended themselves. Thanks must also go to Jenni who took on the catering role of preparing evening meals for all the instructors, this followed on the heels of having organised and lead the WOWOW week. She did the catering after having participated in the days activities so it was a huge commitment by Les and Jenni to the SKCWA. Thanks to those members who want to improve themselves and their sea kayaking skills. There would have been no ISSA course and a chance for our trainees to practice without interested students who want to improve their seakayaking.

Thankyou everyone, the club is better for your participation.