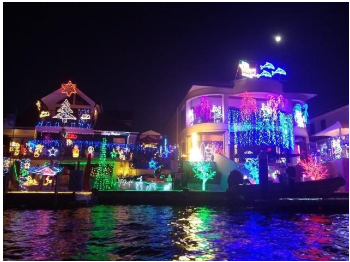 The moon was full, the sky was clear, the tide was high and the lights were on. I invited the Swan Canoe club to join us for a leisurely paddle to view the Mandurah Canal Christmas Lights, following the navigation route recommended by the City of Mandurah and used by the fare paying tour boats. But we did it for free. 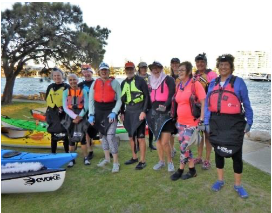 Seventeen paddlers fronted up to Henry Sutton Grove in Halls Head. Twelve of them from the Swan CC and five of us (Andrew Nerissa, Heidi, Peter and myself) from The Sea Kayak Club. After checking that we all had the required white light and advising everyone that the biggest hazard would be other boats, we split into three groups each headed by Andrew Munyard, Colin Priest and myself. It was just on dark as we headed off following the flotilla of boats on their journey in and out of the canals.

The suggested route in and out of the canals was about 8km long. Most of the houses on the canal had some form of xmas lighting, many with themes, some extraordinary displays and one unlit house with a simple “ditto ” in lights pointing to a well-lit up house next door meaning, I think, the owner couldn’t be bothered.

The weather was perfect with a moderate SW wind which you didn’t notice once you were in the canals. It was easy paddling keeping to the right well away from the constant stream of motor boats. A few locals were on their jetties as intrigued by the number of boats as we were by the lights. The displays must take many weeks to set up and I would imagine a few entrepreneurial types would make a dollar or two as I couldn’t imagine every house would have the knowledge of how to set up the lighting displays.

The hardest part at the end of the evening was finding

our way out of the labyrinth of canals back to our cars. However, we all agreed it was a lot of fun and should be on everyone’s bucket list.