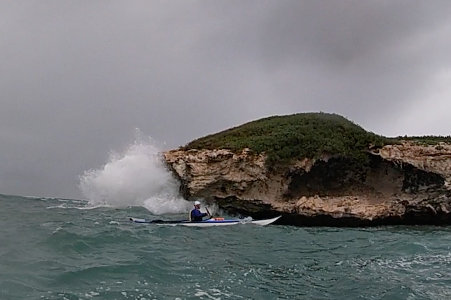 A few hardy souls turned up to the Lancelin weekend. Paul Cooper, Mark Stallbaum, Tony Beswick, Sean Sinclair and Andrew Munyard made the trip north despite some dire forecasts.

The problem with any proposed paddle two months in the future for the paddle program is the big factor of weather.

When I proposed the trip, I thought I might strike it lucky with a last hurrah of Autumn but instead got a welcome to Winter. As I watched the weather change over the week prior to the trip I tried to wish in a big high pressure but instead got a couple of big fronts and upper level disturbances. The forecast was for thunderstorms and heavy rain up to 25mm for Friday night and Saturday looking pretty much the same. Sunday was looking pretty rough with 20 – 25knot winds and 4 to 5 m swells forecast.

I sought Paul Cooper’s advice on whether to  throw in the towel with what was looking like a pretty terrible weekend, but Paul stood his ground against the imminent weather and said ‘Lets go, if it all turns too bad we can always go home’.  There is nothing worse as a sea leader cancelling a trip and then agonising over the weather, wondering if you were right to cancel. I liked Paul’s attitude so, a little mischievisly I put the tent back in the shed and towed the caravan to Lancelin.  I call the caravan a hard tent, it’s dry and very comfortable, I was going to be ready for whatever the weather gods were going to throw at us.

Friday afternoon was pretty warm and pleasant, little did we know what was install for us that night. After a great pub meal, we all retired and then the thunder and lightnting started. They say that if the time between lightning and thunder is 15 seconds or less, get off the water. I only counted to five before an almighty thunderclap boomed overhead and the light and sound show kept going for some time. In the morning when I enquired how others got on, Paul commented he could only sleep through the din once he put in ear plugs. Sean was happily reading a book in his camper pod when he thought , sh… that was close! True to the forecast. Down came the rain.

Camping is fun when the weather is fine, but rain can really stress test your tent and your ability to sleep whilst water drips  like  water torture from above. Mark showed true grit by pulling a raincoat over his sleeping bag to prevent the drops from soaking him and telling himself to just get over it and get to sleep! His dreams were most likely of him visiting camping stores and testing tents like a person tests mattresses.

The morning was dry, which made having breakfast easy and everyone was getting ready for going on the water. Again, the forecast was not good with possible thunderstorms and rain. Fortunately, the wind was 15 knots and less so we would not have to battle strong winds. The storms were a worry, but we agreed to get of the water if thunder and lightning started.

We put in at the park to the south of Sea Rescue. Our launch site was packed with weed and a weed soup was sloshing in and out with each of the small waves that crashed onto the beach. Paul found a spot a little less weedy and we all launched without ending up looking like King Neptune covered in weed. The sky was really grey and rain was obscuring the view to the north. We paddled south to Edwards Island to see if we could find some surf. The swell was running at 3 to 4 metres so we were always cautious of one getting through the reef and finding bottom near us. Unfortunately, the waves were not well formed as they broke early on the reef due to their size and lost a lot of their energy. Going out to meet them at the break line would have been for the very brave and we decided we were not that brave.

We then paddled north and found some waves at the point near sea rescue. You had to be on your toes as they were not spilling waves but rather  of the type which  let go of all their energy at once. There was an interesting mix of waves with a break from the SW and one from the west and they met in a cauldron of confusion. There was some energy to them so you had to be on you’re toes. I had just had a great a ride to shore and on paddling out I did not lean hard enough  into the cross wave bearing down on me and was capsized. I was tossed about for what felt longer than 10 seconds (I checked  it on my GoPro to ), eventually putting up the white flag and wet exiting in about 6 inches of water, Sean later commented that he thought I must have dug a furrow in the sand with the GoPro on my helmet and that it was lucky it stayed fixed to my helmet. I have included the 10 seconds of video for you all to have your own underwater experience.

We paddled up to Lancelin Island into a 13 knot NW and the rain decided to really come down. It was a  white out with the destination disappearing and even other paddlers in the group hard to see. Again, no waves presented themselves for a decent ride so we explored the island and watched in awe as waves of white knuckle size crashed onto the reef in a mass of spume and noise.

We stuck our noses around the northern end of the island where some ferocius currents were returning the water that was crossing the reef had  managed to find a way to return to the deep. You had to maintain spatial awareness to ensure you were not being taken by the currents to an unpleasant outcome.

We tried to ride a wave close to the southern end of the island where waves crashed in great towering spray against the cliffs but again were thwarted in any decent ride. Always optimistic we returned to the southern end of  Edwards Island but again, the waves were poor and  whilst they had decent size, they were just  not rideable with much of the energy having been thrashed on the reef.

Returning to our launch site we were surprised to find all the weed that had made weed soup on launching, had been swept out to the bay and the beach was now clean and made for an easy landing. For the time that we had been paddling numerous showers of heavy rain had swept through, it  was pretty handy in keeping the salt off you.

On returning  to our campsite everyone with a tent found they were now camped in the middle of a lake. Mark’s tent was particularly affected with what you would call waterside accommodation. I looked in at the puddles  in the tent and was glad I bought the caravan. Mark was busy packing up, he had endured enough, he was going to start researching tents, this one  had had served him well, but had reached its use by date. Paul’s tent was under threat from rising waters and Tony was confident his Hilliberg, now pitched  in a sea of rising water would be OK but  the enthusiasm for going through another night of forecast rain was too much and everyone decided to return to Perth. Sean and I had faired much better in campers and were pretty comfortable. We mulled over the paddle and discussed all thing sea kayaking over a pie and coffee at the bakery opposite the caravan park prior to leaving for Perth.

Everyone had a good time and I’m glad we decided to go ,however  we were lucky that storms did not eventuate, the weather was fairly good  with a  pretty big swell running and some interesting energy getting inside the bay. Fortunately the energy is taken out by the reef that lies off Lancelin, but a trip along the coast would not have been possible with the swell that was running on the Saturday and Sunday.