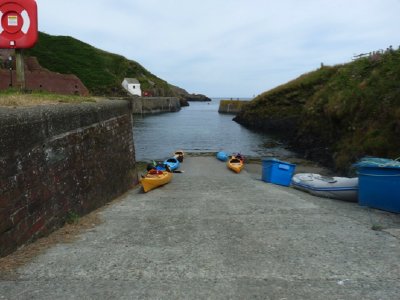 At lunch the boats were brought onto the pebble beach. The flat seas and rock outcrops we paddled through can be seen in the background. Photo Jane Perkins. The tide is on the way out as we prepare to launch. Lime kilns can be seen on the bank on the left. Photo Jane Perkins. The geography of the bitches tidal formation.
Image from http://www.flickr.com/photos/earthwatcher/2925646467/ then annotated.

On arriving at Haverfordwest train station in Pembrokshire, I was met and taken to Preseli Venture’s facility on the coast to the north. That afternoon we selected our gear (Dagger Charleston boats,  farmer Jon wetsuits, cags, helmets, PFD, booties, paddles) and did an introduction paddle in protected water at “the needle”.

The coast around here was cliffs down to the water’s edge, with inlets that allowed access. Along the cliffs there were various rock formations and we were encouraged to test what the smallest gap that could be navigated (with the assistance of the small swell). I started exploring some caves – ignoring the warning that the Irish ferry would cause a significant wake. Needless to say I was deep in a cave (almost dark) when a significant set of waves came due to the ferry. I back paddled like never before and survived (and I knew we had a good guide when I turned around and saw Jon’s boat just inside the cave – at shoulder height on the next wave). From that point on I explored caves in reverse – improving my reversing skills significantly during the week.
As the week progressed we were encouraged to find smaller gaps to negotiate, and Jon was happy to instruct us on different draw strokes if we wanted. On another day fishing lines were provided for those that wanted to try kayak fishing – Jon was the only one who was successful.

Over the course of the week we covered the St Davids coast from Cardigan to Newgale as a variety of day paddles. It was easy paddling with the wind or tide helping us along most of the time – and a pub at the takeout point most days.On the second last day the tide and wind was favourable to do the stretch of coast near Ramsey Island, Including the feature known as “the Bitches” or “witches” depending on the tide direction – high tide was to be around 3 pm and be about 6m, meaning peak flow was going to be around 1 pm but not too strong. We were joined by the owner of Preseli Venture, Nick, and put in at Whitesands bay.  We paddled across to Black Island, learning/practicing ferry-gliding as we went. I found I needed to aim at least 30 degrees north of the island in order to paddle in a line to the island – and we were not at peak tide yet! We estimated that our speed due to the tide over the next section was 8km/hr. Having circumnavigated this small island we headed south, taking care to stay sufficiently east to ensure we went to the east of Ramsey Island (Nick has had a group split in 2 as they reached Ramsey Island and the current split around the island).

As we approached the southern end of Ramsey Island we stayed close to the coast (we did not want to go over the bitches) and one at a time went through a natural cave/tunnel. Once positioned in the tunnel mouth you were quickly swept through, and needed to make a hard right at the end to the still water of a bay. Once assembled in the bay we ventured back past the tunnel and got our first good look at the bitches. The guides demonstrated the crossing of the first current and taking refuge in the eddy between the currents. We then tried it ourselves and I was promptly chewed up and spat out into the freezing water, only to float downstream to Jon who was playing catch. I demonstrated the Australian method of assisted rescue, but Nick insisted I use the English method – I did not like lying between two boats, and then sliding up and into my boat. After that I successfully negotiated the first eddy a couple of times before stopping for lunch. The plan at the bitches was to head upstream with around a 10 degree angle towards the current coming through the rocks. The reality was as soon as the front of the boat got into the water current it swung the boat around and you headed downstream at a rapid rate, and paddled across to the next eddy. We spent some time playing back and forth across the 4 currents, and watching the water change character with the tide. Across at the mainland we could see a fishing boat making almost no progress against the tide, despite its best efforts. As the tide slaked off it was time for us to continue to the takeout point.On the last day, we had become quite adventurous with our testing of small gaps – a little too adventurous on one occasion, and one of the boats has some serious gouges in it. The group all assisted in the rescue with swimmer, paddle and boat being separated. The Australian method of pulling up across 2 rafted boats was used to great effect, before we got towed back to where the boat and paddle had been collected to.In all it was great to paddle in different conditions, and I would highly recommend it – the bitches was an extra bonus.  I learnt a lot of boat manoeuvring skills, unfortunately I lost most of them over the next 2 months of no paddling.