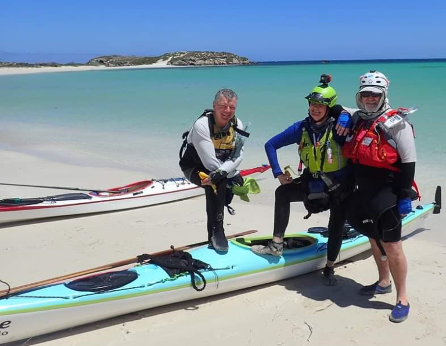 Paul Cooper arranged the Cervantes weekend this year (as usual). Sixteen kayakers made their way up to Cervantes on Friday evening and another arrived just in time for the paddle on Saturday morning.

Saturday morning we were awoken at about 5:00 am by screeching parrots and warbling magpies. Time for breakfast.  People slowly emerged to start organising themselves for the day. It was already windy with about a 10 knot Southwester.  The forecast was for the wind to swing to the South and pick up to around 20 knots after midday.

The rest of us set off from Cervantes for the 25 km downwinder to Jurien Bay. We roughly split into two groups; the sailors and the ones with too much energy, and the paddlers.  I lead the paddlers off while the sailors sorted their sails out.  The wind and the waves soon picked up and the sailors cruised on by.  There were nice waves to catch and we made good time.  We soon arrived at Hill River for a break.  The wind had picked up and was now consistently over 20 knots.

The following section was written by Andrew Munyard

We all launched from Hill River successfully with Richard and Damon being last off the beach. The quartering sea breeze making getting off a little difficult.  As Richard got organised behind the break, he decided to do some capsize training which Damon responded to and got him back in his boat.

Steve had headed off with the paddlers.  We were past Booker Valley (half way between Hill River and Jurien Bay) and the sailors were still behind us (just).

A little while later we got a gurgled radio message with Peter telling us he had capsized up ahead, his orange boat a real bonus in spotting it in the waves.  Richard this time performed the rescue but as Peter pumped out his boat with his head no longer looking at the horizon but down into his boat, sea sickness overcame him. A common occurrence in performing rescues. Peter decided he needed to get off the water and made a beeline to the beach, Damon raced ahead to assist with the landing.

As we stood on the beach with  Peter not feeling too good. Andrew walked to the back of the beach and found a bike track. We now had a way to get Peter out if needed. Peter had texted Pel that we were waiting for him to recover. As I walked back to the group on the beach, Pel’s voice came over the radio. I thought that was strange as he would be in Jurien but the comms were very clear. As I turned around for one last glance at the map on the bike path I noticed Pel and Des Cook walking down the path with Pel calling me on the radio. They were parked 100 metres from our position and had walked in!

Peter took the opportunity for a land based exit and the remainder of us paddled on to Jurien.

Andrew decided to disobey all the rules he had made for sailing and threw the sail up without making sure all lines were free. The mainsheet tangled and the sail filled with wind and over he went. Luckily for him the water was only waist deep and he managed to perform his own rescue, much to the disappointment of Damon who had paddled back hard into the wind to assist.

Wind speed on the Jurien Bay jetty was measured at 26 knots with 30 knot gusts.

Back to Cervantes to get cleaned up, have a break and head off to the pub for dinner.

The weather forecast for Sunday sunny with 18 knot southerly winds increasing during the day.  We decided to just have a short paddle to the Cervantes Islands and agreed to meet at the Cervantes jetty for 8:00 am.  By 7:30 am most of the group had left the camp for the 5 minute drive to the jetty leaving a few of us wondering whether we missed something. Heavy traffic maybe?

We had a great paddle out to the islands and enjoyed the scenery when we landed for a break. Fortunately the wind was less than forecast.

Thanks for another great weekend. Paddlers were