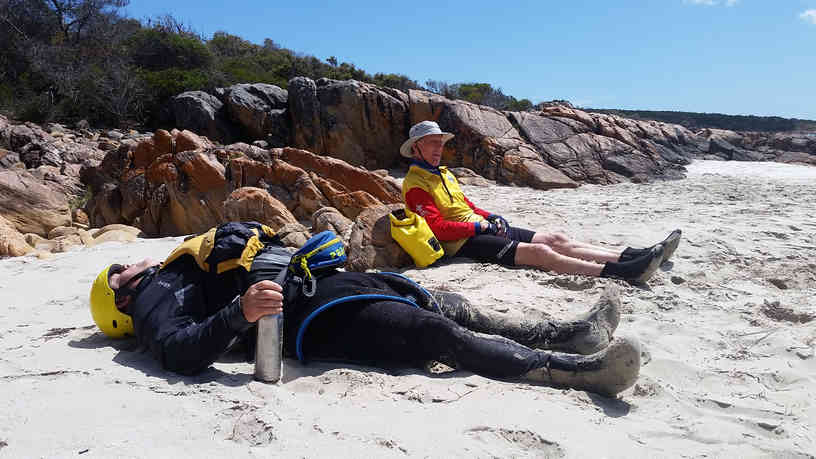 The trip was organised by Bruce, who’s neighbours Kerry and Paul kindly rented out their holiday home to us for the 3 nights. Attendees were Andrew B, Bruce, Jill, Judy, Sharryn, Jane, Jo, Steve, Daveena, Damon, Jenni and myself (Peter).

We arrived at the house Friday afternoon, admiring its location (right next to the beach), size (5 bedrooms and a dungeon), and character (colourful interior, random artefacts, and family memorabilia). 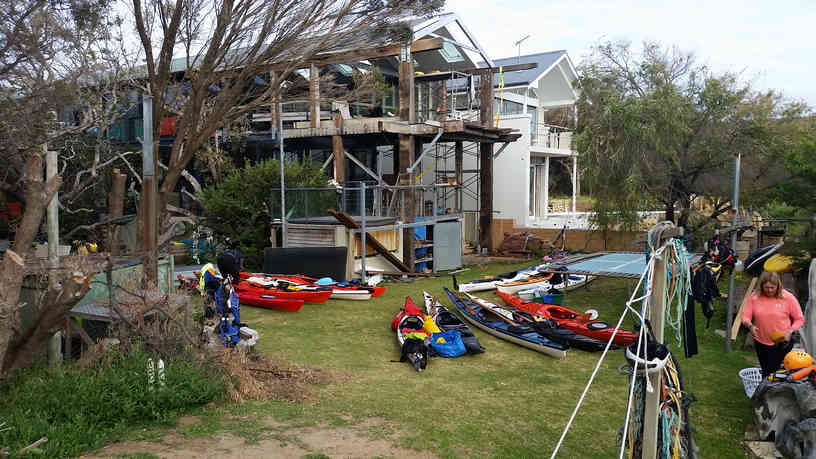 After settling in most of us set off to explore Bunkers Bay. June, Sharryn, Jill and Daveena by foot, and Steve and Damon by kayak. They paddled SE to Rocky Point where they saw seals bobbing around in the water with the surfers. Andrew and I paddled off to play in the waves off the west end of the bay. However on closer inspection found the whitewater from the 1 to 2 metre surf flowed straight onto the rocky shoreline, with no safe channel between. We gave it a miss.

Friday evening was spent having dinner together, solving the world’s problems and discussing the merits of grey hair. We also planned the important components of the Saturday morning kayak trip – sleeping in beforehand, and being on the water by 10am.

Come Saturday the sunny weather and sound of crashing waves got us motivated earlier than expected. So much so that Jenni, Andrew, Jill and I hatched a plan to get everyone on the water a bit earlier – walking around in lycra while holding a dry bag. It worked perfectly and soon everyone was packing their yak.

The trip destination was Castle Rock, 8.5km away towards Dunsborough. The main challenge was launching through the waves in Bunkers Bay. These were thick and sudden dumpers with 1m sets. It provided a useful lesson for identifying set waves and waiting for the lull between them. To drive the learning home even further, Jo bravely and selflessly demonstrated what would happen if you paddled out during a set. She punched halfway through the wave only to be mercilessly sucked backwards over the falls and rolled over for good measure. We learnt our lesson.

Back at Bunkers we found the wave size had increased and so most paddlers chose to land further up the bay. Surfing the waves in was not advisable – no kayak friendly sliding down the face here – more likely a quick hypotenuse, then twisted sideways and rolled a lot more angles than 180deg (sorry Pythagoras).

Once back at the house several of us enjoyed the behemoth 8 seater spa. Succumbing to it’s relaxing warmth, we planned how to sleep in it without drowning. Next we headed inside for an afternoon of wine, cheese and intellectual discussion (actually I can’t remember what we discussed, probably wine and cheese).

Saturday night was food sharing night, and everyone contributed great food they’d cooked at home or on the night. The nights conversation included the fact that this trip has perhaps set some kind of club record for the ratio of women to men, with 7 women and 5 guys present. Indeed, it was almost 9:5 but Sandy and Brenda pulled out at the last moment. The ladies enlightened the blokes about some of the challenges which women face in a club populated mostly by men. For example the value which men place on assertiveness can of course be a virtue, but it can also hinder a culture of cooperation and support. Overall the strengths of both sexes were recognised, as well as their room for improvement, such as men learning to step back and give others a chance, or women developing confidence to step forward and provide wise guidance.

Cape Naturaliste and Sugarloaf Rock was the destination for Sunday morning. Daveena, Andrew, Jenni, Steve, Damon and I planned to make our way there by kayak, while June, Sharryn, Bruce, Jill, Jo and Judy were keen for some bush walking in the same area. (photo by Jill)

A bommie was breaking off the NW headland at Bunkers with 2-3m waves so we had to paddle far offshore before we could head west to the Cape. Fortunately the wind was gentle and the waters free of chop. The swells were even larger as we neared Cape Naturaliste – around 3-4m – and curious Albatross flew over us to take a closer look as we rose up and down over long, impressive walls of water.

Amidst all this beauty my own mind still found it necessary to worry about sharks. They’d been in the news again and Bunkers had it’s own history of attacks. However Jenni coolly advised that seeing a shark “is just like seeing a unicorn.” I was concerned by this response (what kind of magical mystery kayaking tours had come to take Jenni away?) and chose to believe our most experienced paddler was actually offering a Zen-like riddle for me to solve.

As we headed south down to Sugarloaf Rock the big swells reared even higher as they broke along the coastline and we admired their huge plumes of spray, feeling thankful to be much further out to sea. This didn’t stop Andrew from encouraging Steve to “paddle over and touch the rock” when we arrived a few hundred metres from Sugarloaf. It seemed an appropriate ritual but Steve would not oblige. Perhaps he’d left his lucky banana shirt at home.

A quick raft-up snack and we headed back to the Cape and then to Bunkers. By this time our bush walking colleagues had been watching us from their trail, and in contact with a communications device. At one point Bruce alerted us to a whale nearby and we heard and saw the spray from its blowhole. (photos by Jill and Judy) 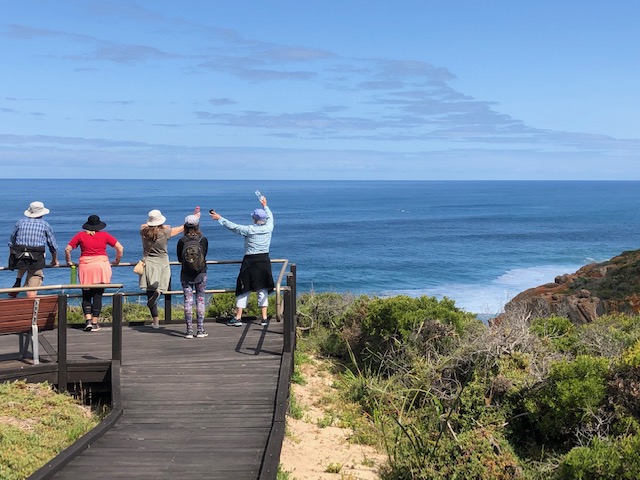 After arriving safely back to Bunkers Bay we enjoyed a relaxing break and swapped stories with the hiking group.  A lot of the group went home Sunday afternoon, we bid farewell and looked forward to future Bunkers paddling. Staying on until Monday morning was Jo, Andrew, Jenni, Bruce, and myself. We had a quiet afternoon, though Andrew and I went for a hike on the Cape to Cape trail south of Sugarloaf Rock, trying a bit of photography along the way.

Special thanks for the trip goes to everyone really, for making the trip fun and engaging, though it wouldn’t have been possible without Bruce and his neighbours Paul and Kerry.