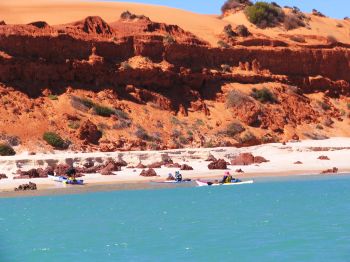 The idea of a 5-day kayak trip at Shark Bay conjures up images of lazy afternoons spent fishing or snorkelling. Those of us who had this in mind at the start of the trip were going to be out of luck.

There were 10 paddlers on this trip, and we all arrived in good form to stay overnight in cabins at one of the caravan parks in Denham. The sunset was beautiful from the town’s beach and the cameras went into overdrive. The weather next morning was fine for the 9am start, and luckily the snorers had not been so noisy to put us off a good night’s sleep. Leader Phil Evans divided us into 2 groups of 5 for the day and we set off in fairly calm conditions with a little high cloud and smooth water. Visibility in the water was excellent so we all saw lots of rays and the occasional shark. Laurie saw a yellow-bellied sea snake. Our destination was Big Lagoon, 23 km from Denham.

Close to the lagoon, the tide was going out so the flats were becoming shallow. This slowed us down somewhat, but the shallow water did not seem to worry the sharks, some of which appeared to use the approaching kayaks to help herd the prey fish within range. We all had close encounters with these sharks but none were big enough to worry us as long as we stayed upright.

Finding the deep channel into the lagoon was not too difficult but there was some very shallow water near the mouth. We all succumbed to the temptation to cut corners inside the lagoon rather than taking the long way around in the channel. However, we paid for our sins by having to drag our boats back out into deeper water just before arriving at the campsite. Helen and Russ went for a dip in the channel in front of the camp – the water was clear and refreshing.

Those of us who went for a pre-dinner walk were rewarded by close sightings of emus and red kangaroos, and the camp layabouts were visited by a small pod of dolphins fishing in front of the camp. It was a warm and calm evening, and we all fitted under the shade of the communal tarp for a very pleasant dinner.

The wind picked up overnight so on Day 2 we started out against a moderate southerly until we rounded the corner to exit Big Lagoon. Eric cut the corner a little too close to shore and although the tide was far more favourable than the afternoon before, he still got himself caught among some rocks. Pretty soon though, we were all out of the lagoon and heading north with the wind behind us. Kevin and Helen had their sails up and didn’t need to paddle. Even without sails, according to the GPS we were drifting at 4-5 km/hr. At one stage Kevin had to drop his sail so that he could stay back with the paddlers in the group.

The sky looked decidedly threatening in the early afternoon. Visibility was not as good as it had been the day before, but we were treated to schools of sharks in the shallow water again. Some of these sharks were well over a metre long and there were some with attitude. Phil saw one nearly 2m long pass beneath his bow. The idea of a swim in these waters had somehow lost its gloss. Although the water was shallow in the afternoon, there was enough depth at the campsite to paddle right to the beach. It had been an easy 26km day of paddling.

On reaching camp, the afternoon cloud had dispersed without dropping any rain on us at all. However, the wind had not abated and after 2 attempts at erecting the communal tarp, we had to give up. Eric’s beachfront villa became the social focus of the late afternoon, but by dinner time most of us retreated to a slightly more sheltered site among the dunes. Dinner conversation again centred on food and we all seemed to be obsessed with what other paddlers were cooking. Roz and Phil outdid us all and cooked steaks. This was day 2, and nobody else had expected fresh meat to last that long.

There were just enough clouds in the sky to give us a beautiful sunrise on Day 3. Then the wind came up to blow them away, but it was ESE so we were sheltered for the paddle to the Cape. Roger had promised some spectacular red cliffs before the Cape and we were not disappointed. Nathan, the serious photographer among us, was desperate to get some shots of the cliffs at Broadhurst Bight but was not game to use his camera from his kayak. In he went for a perfect beach landing in a gentle swell while Phil and Roger hung about in support. Meanwhile Helen took the opportunity to test out her tacking skills with her sail.

Up until this point we had been in shallow water, but rounding the Cape we at last had some deep water and since we were coming into the wind, there was quite a sea to contend with. We now had the prospect of a long paddle with the wind in our faces, so it was a great time to break for lunch.

After lunch it was back into the shallows and shallow it was indeed. At least in the shallow water there were no waves to punch through, but the wind made it hard work. The wildlife seemed to be less common on this side of the Cape, but there were still some sharks, rays and turtles. We slowly made our way south to our preferred campsite only to find that it was too shallow to get in close. Roger knew there was a good site further south so on we went. We finally made it to that site and Roger paddled in as close as he could before leaving his kayak stranded in the shallows to walk in to shore. It didn’t look far at first, but after Roger had walked for some time he seemed to be just a speck in the distance and he still hadn’t reached the dry sand.

Back home after the trip, a close scrutiny of Google Earth and some GPS coordinates revealed that he’d walked about 400m to shore. The prospect of lugging 3 full loads of gear each (or 6 loads for Eric), plus the kayaks did not look all that attractive. However, dusk was approaching and we had already paddled a long way into the strong wind. Roger and Phil went into a huddle with Kevin and Rod, and it was decided to push on to the western side of Guichenault Point. There was no guarantee of an easy landing there but Roger reckoned it was much more likely than where we were. So on again we paddled. To our great relief, the paddling was much easier because we were not paddling into the wind, but across it. The decision turned out to be brilliant and we took the kayaks right into shore between some mangroves. We had paddled nearly 34km, most of it into the wind, so in failing light but rejuvenated spirits we pitched our tents and started into dinner preparation.

It was a cool night and Day 4 began with a strong breeze from the southeast. We must have all been pretty keen to get moving because we were ready to go 30 minutes before start time. The tide was high so we were confident we could find our way around Guichenault Point despite Roger having previously experienced shallow water in this area. Sure enough, the Point was a piece of cake but then we had to contend with constant wind in our faces; 16 knots gusting to 24 and our progress was down to 3-4 km/hr before the morning break. It seemed to take forever to make it past the impressive cliffs of Herald Bluff. The wind dropped off after the break, but unfortunately so did the tide. We then had to pick our way through leads in the shallows below the beautiful red cliffs.

Once again we had trouble finding access to a good campsite due to the timing of the low tide. Eric found a good lead and Roger followed him in, but they were stranded about 80m offshore. It was close to Cape Rose and about as good a campsite as we were going to get, so we determined to carry the gear in. Helen and Kevin decided to go sailing instead, experimenting with how close to the wind they could run. After everybody else had unloaded and pitched in to carry each other’s kayaks we felt pretty smug about leaving the 2 sailors to carry their own gear in, especially since by this time, the closest they could get to the beach was about 150m. In the end however, they outsmarted us all and just left their kayaks anchored until the tide came in far enough to drag them in.

On Day 5 we awoke to a magnificent sunrise, except for Eric who had been up well before sunrise to organise his gear for packing. This was the last day and we only had 11km to go, having already covered 102km. Although it was cool and breezy, we all savoured our last breakfast in the wilderness. We hit the water early with Cape Rose providing protection from the worst of the wind, which was blowing at 18 knots, and gusting to 25 from the SSE. It wasn’t long before we rounded the Cape and lost that protection, but as long as we stayed close to the shore we kept up a pace of 4km/hr. Since it was at our estimated time of arrival at Monkey Mia coincided with feeding time for the dolphins, we stayed out wide for the last kilometre or so, and it was here that we really started to cop some strong offshore winds. Finish-line fever took over and it was a hectic pace against the wind for all. Sure enough, just as we arrived, the dolphins came in. Also on time at Monkey Mia were Carolyn Coogan and Helen Cooksey’s artist friend Helen to return the drivers to Denham to pick up the rest of the vehicles.

It was perhaps just as well that we’d paddled so hard in the morning, since by mid afternoon the southerly was running at 23 knots, gusting to 30. The only accommodation at Denham that night was the tent site at the caravan park. It was not easy to put up the tents in those winds, which increased again in the early evening. Some of us wondered if our tents would still be there when we returned from dinner at the pub. Sleep is not easy when being beaten around the head by flapping tent walls, so several gave up and tried their luck in their cars.

So was it worth all the effort and pain, considering that not one of us caught a fish or donned a mask and snorkel? Absolutely! It was a great trip. For some of us, the experience of cruising along at speed under sail without even dipping a paddle made it all worthwhile. For others it was the chance to test out new gear, being able to check out the possibilities of alternative camping cuisine, or just being together with a bunch of like-minded friends, and having the confidence of knowing that there was always good leadership and support if anything had gone wrong (which it didn’t). The scenery, wildlife, clean air and wide blue skies were just a bonus. Thanks to Phil Evans for an excellent job as Leader, and to all the other paddlers for their friendly support throughout the week.[/vc_column_text][/vc_column][vc_column width=”1/2″][vc_column_text] The water is a long way from the beach! – photo Russ Hobbs