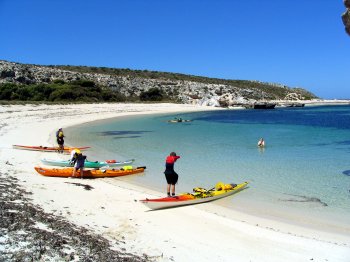 I always look forward to going on the Rotto trip. The sea kayaking is always different – some years the winds are high, other years the swell will be huge which makes it interesting rounding West End.

This year there was a rush of people and we filled up the quota of 12 very quickly. In fact we had 14 people at different stages but we won’t spread that around. Sandy and Ian planned to paddle over in the evening and went down to find the winds too angry for even them. So, not to spoil their plan they left at 3am and arrived just in time for breakfast on Saturday morning.

The other more sane variety of sea kayaker paddled over at 8.30am on the Friday (John Rad., Judy, Helen, Rod, Martin) when the wind was in our favour and we could be seen by the ships, submarines and occasional crazy boater who frequents the channel.

We were all really pleased with the accommodation as we hadn’t expected it to be as good as the big house that lies directly above the sandhills. It was set back further but still had great views and there was room to leave our kayaks in the sandhills.

There was a great atmosphere from the start and it was fun to meet and get to know the partners of some of our regular paddlers. Rod’s wife Carolyn is a great artist and spent most of the time biking to various haunts to discover new areas to paint.

Martin and Val had only lived in Perth mid-year and were warned not to go off the tracks or they would step on a dugite. As they were honorary guests they were allowed the only double bed so hopefully they enjoyed the privilege! They were also given special barbecue lessons by Rod Coogan and strict instructions on steak cooking.

Day two was only going to be a saunter around the protected half of the island with Russ and Sue, Helen, Judy, Martin, John, Sandy and Ian starters. We slowly and lazily explored the reefs, wending our way between the reef from The Basin, Longreach, Geordie and Parakeet Bays. The clear blue water with variety of blues and greens was mesmerizing. The beauty of paddling over the reef is that no power boats can venture where we dare to go (sometimes risking a scrape of the gel coat).

We had every intention of turning around at Narrow Neck. I have circumnavigated Rottnest about 4 times and well know the difference there can be with the two sides. Everyone was keen to keep going around the big swells at West End but after the peaceful kayaking I don’t think they were aware of the unpredictability that lay ahead.

Ian Pexton led us around West End and we made sure to keep together. Before leaving Eagle Bay we were surrounded by a number of playful seals, leaping out of the water, rolling over and generally showing off. Helen was the first to receive a shock as she had been watching the swell coming in from starboard   and then took a look at Fishhook Bay. Suddenly John said watch to the right. A big wave was about to break. Helen remembered her lessons – leant into the wave and she just made it over the breaking white cap. Needless to say, this resulted in all of us moving out a little deeper as the swell here comes from all directions. We had a slight breeze behind us which enabled us to use our sails. However, this ease was soon to be disrupted as we were about to round Parker Point where we could see waves breaking inconsistently. At this stage we all had our sails down (Rod Collinson was having his first paddle for a year and didn’t even have a sail to help). Ian decided to cut through between some breaking waves and Sandy decided to follow him. Russ and Sue, Helen, John, Rod and I decided on a course further out – luckily. I looked over to where Sandy had been and thought she may have been taken out but we didn’t have time to think of others as waves were nearly breaking on top of us. It was heart stopping stuff. After rounding Parker Point we pulled in and discovered that Sandy was indeed dumped by the wave. The force of the wave had ripped her out of the boat and not allowed her to roll up. Eventually she was able to grab the boat and re-entry roll (a must for sea kayakers). Sadly, she discovered that she had lost all of her sail except for a tiny piece of bent aluminium. At least it was a good road test for her trip around the coast of Australia.

As we paddled back to our lodging (32 kilometres) we felt great to have achieved the circumnavigation. There was a helicopter and a lot of activity and television crews nearby – was it all for us? Not likely. Unfortunately, an older competitor in the swim through Rottnest had suffered a heart attack and died.

We had our last barbecue and obviously Val had learnt her lessons well. Wayne and Rod had missed our adventure but had obviously gained a lot of brownie points from their wives for their family day out

We paddled back to Perth with a side wind.( paddlers included Rod, John, Martin, Helen and me). I discovered the beauty of the Les Allen sail and have since   changed my Pacific Action sail to one of   the smaller sails more suited to our ocean conditions. This sail is based on the NSW model with a few variations.

Thanks to everyone for the best Rottnest trip ever. Starting the long paddle back to the mainland – photo Russ Hobbs