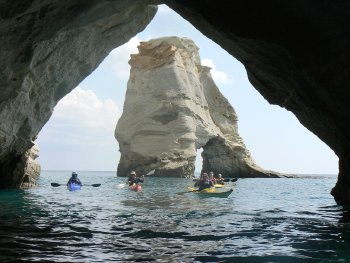 This year, as I was going to travel on the last voyage of the QE2 from Southampton to New York I decided that I was not going to waste the opportunity and so of course I went sea kayaking in the islands around Greece.

I did spend 10 days in Kefalonia in the Ionian Sea once again with Pavlos and Yvonne who run Monte-Nero Activities. It was a sensational experience but you can read about it in my article I wrote last year.

This year I visited the island of Milos in the Aegean Sea. It is the most southwesterly of the Cycladic group and lies about halfway between Athens and the island of Crete. It is about 20km long, in an east west direction and about 10 to 15km north-south. Its most famous export is the Venus De Milo, a 4th century BC statue of Aphrodite. On this island lives Rod Feldtmann, an Aussie who runs the only other commercial company in Greece (Sea Kayak Milos). He went there as a geologist and ended up marrying Petrinela, who is a local girl. She runs the bed and breakfast in Triovasalos and he the kayaking side. He is a great teacher and is a 5 star British canoe Union paddler and 4 star coach with a dry Aussie humour.

This island has been shaped by millions of years of volcanic activity so it has soaring cliffs and magical caves. The superb villages with the typical blue and white architecture look spectacular perched on the clifftops. It is also great because it is not as touristy as other Greek Islands and is an island where Greeks go for their holidays and tends to not have the pushy frenetic pace of the popular islands. It is untouched by hotel chains and package tourism and the authentic local culture has been preserved. There are plenty of interesting ancient ruins to explore on the days off from paddling.

I actually stayed in the guest house run by Rod’s wife and family (at 30 Euro it was cheaper than anywhere else in Greece) and each day we would be driven to a different place to paddle. If it was too windy on one side of the island he would take us to a place out of the wind on the other side. In the evenings it was just a walk up the hill to the Plaka and the many restaurants where we enjoyed the Greek beer, Mythos.

On one of our day trips we met up with Hadas Feldman, an Israeli Instructor and world kayak adventurer who has kayaked with Justine Curgenvan and appeared in This is the Sea DVD. She was circumnavigating the island with a group from Israel. They did it in a week so it is not a really big island. This was travelling leisurely and spending time exploring and having free days to explore the 70 or so beaches. Rod hires kayaks so it is possible to go off on your own with a group.

The most spectacular place to paddle was Kleftico. The coastline on the way is interesting as you creep along exploring all the nooks and crannies. Suddenly, the sea arches come into view and you realize this is some place special. Rod always encourages paddlers to try different things and some had fun jumping off some cliffs into the water.

The kayak I used was a plastic Rainbow Laser made in Italy without a rudder which was very easy to use except in a beam wind on one of the days. In fact when I paddled around Statue of Liberty in New York I also used a rudderless and skegless kayak which I found difficult to control on the return home to the Manhattan Sea Kayak Club with a following sea. I usually like a following sea but without the rudder and skeg I found the boat slipped onto its side. I guess it didn’t help not being able to fit my knees under the coaming! The other boat I used in Kefalonia was a Prion which was easy to use and had the option of a rudder.

Milos can be reached by fast ferry or by plane and both are about the same cost of 40 Euro. Perhaps the slow ferry is a bit cheaper. All photos by Rod Feldtmann