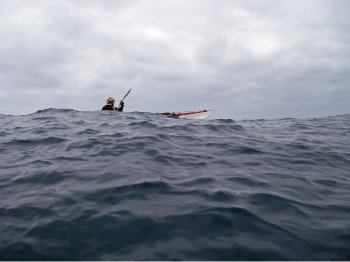 The C2C is the iconic paddle for sea kayakers. The seed for this adventure was sown in 2006 when Wayne Stocker and I completed the paddle with the thought it might provide an incentive to other motivated members to further hone their paddle and group management skills.

Weather conditions are a significant part when planning any ocean paddle, particularly the C2C as there are few safe landing spots in big conditions. Referring to BOM Wind Roses, February and March are prime times in relation to winds. The weather pattern being hoped for was a minimum of four highs of about 1030 hPa migrating toward southern WA from south of South Africa. The highs at this strength are strong enough to keep the low pressure systems down south toward Antarctica. At 1.00pm, 8 March that’s exactly what we had!

All members arrived at Turner’s Caravan Park, Augusta at varying times Sunday afternoon. After erecting tents and a cuppa, the remainder of the day was taken up with trip discussions and a late evening visit to the launch site.Everything looked good for a Monday launch.

The paddle rounding Cape Leeuwin can be a spooky experience. Big swells from the SE/ SW and the point where they both meet, crashing surf that sounds like a steam train with plenty of rock, reef and bombies to keep you on your toes. Alan Hale joined us at the launch and paddled to the ‘water wheel’ before returning. Seas were of a lumpy moderate swell that allowed us to sail most of the way to a lunch stop at Cosy Corner. Enroute Dave saw a school of dolphins surfing about and I really enjoyed using my new sail which I’d previously tested at the Jurien weekend. On arrival at Hamelin Bay we were greeted by the resident three sting rays who were cruising the shallows. Di was already there with the Bramley camper set up – lucky boy that Jim!

Launched this morning in good conditions toward North Point where we paddled amongst the rocks and boulders. Passing North Point, Jim decided to do some trolling. Cast his line but the only thing he caught was his sail!

Lunch stop was around the surging surf of Cape Freycinet into the lee of Conto’s Springs. Rounding the Cape Kelvin was paddling close in shore but a safe distance from surging surf on rocks. However, as he passed around ‘a corner’ so to speak, he was in the wrong place at the wrong time and was swept up onto rocks. Kelvin rolled three times but was immediately wiped out each time because he was in a hole formed by surging current and submerged rocks. He was out- Jim was in very quickly to attach a tow line and pull Kelvin’s boat to less turbulent waters. I picked up Kelvin on my bow and returned him to his boat. Damage was minor with small gouges to bow, stern and helmet, slight abrasion to his shoulder and a torn cag. Just as well he was wearing his helmet. We had lunch in the lee of Conto’s with great views all around.

Leaving Conto’s, Dave was paddling closer to shore toward Marmaduke Point where he was nearly caught in shallow waters with dangerously large breakers coming in. As you will read later in this article there is a worrying connection between Dave, shallow water and big breaking waves. At this point we paddled about 1km out to sea just to be sure of no more surprises. We by-passed cappuccino at Gnarabut because it was just too big to get in safely. Jim, the coffee magnet, was disappointed, however within a few kilometres he was about to make a starring splash!.

Approaching Cape Mentelle we were paddling in large cresting swells when an unexpected set rolled in. “Wave” was yelled and we all headed seaward managing to miss the break. Jim was not so lucky. He was trapped, braced the first breaker, thumped and capsized by the second. Jim’s first roll attempt failed because the turbulent aerated waters provided no support. By this time the third wave was just about on him when he successfully rolled and managed to sprint paddle just beyond its clutches. Dave, Kelvin and I were relieved, Jim probably was too.

The path into Kilcarnup had us paddling 3 metre faces in through the surf break and around the reef. Because of high tide and strong winds there was just enough space between rocks to camp.

The launch from Kilcarnup was highlighted by a pod of surfing dolphins. What a great sight to start to a big swell day. A short distance out, Dave said he felt he had been bitten by something. There was a very red lumpy rash on the inside of his elbow. Most likely an insect or spider had crawled into his paddling top the previous night. The stinging slowly subsided with no further problems.

The 10km paddle to Cowaramup Bay (Gracetown) was in building conditions and surfers were out in force. We had to paddle a wide arc around South Point to dodge some very intimidating surf. At Gracetown and headed directly for the General Store for a well earned early lunch. That consisted of juice, coffee, pies and pasties. We were hungry, to our surprise, Dave ignored the lettuce leaves and carrot sticks to woof down a vegetable pastie. This was a big day in more ways than one!

It was 18km to Cape Clairault (Injidup) and we paddled this section with one eye ahead and the other firmly out to sea. The swells were big and the surf breaks pumping. It was impossible to miss Moses Rock. The splash of the breaking waves reached to the cliff horizon. It was huge and thankfully we were a safe distance from it. However, just around the corner was the shore break at Injidup. As with entering Cowaramup Bay we had to paddle a wide arc again around Cape Clairault to avoid the huge surf breaks.

The beach at Injidup Point is steep and was nothing as I remembered. The beach was completely covered with surging water to the base of the sand dunes and vegetation. There was a very intimidating shore break that dumped directly on beach sand. The decision was to land and discuss options and to rendezvous with Di Bramley. Adrenalin was pumping as we approached that dumping shore break. Individually we waited for the lull between sets then quickly and cautiously paddled in, stopping in near knee deep water to let dumpers pass under us and paddle in on their backs to be swept up the beach with the surge. Unfortunately this is where Dave, big swells and shallow water come into play. Dave had paddled into position, to let a swell pass under him. Problem was that swell just kept getting bigger and bigger and within a second he was trapped. It looked as though he had a tonne of water land directly on top of him.

Still in his boat, he braced, was crunched and appeared to have his kayak swept over him in only centimetres of water. It was a very disturbing sight. We instantly lunged for his boat as he was being rapidly sucked out into the path of the next dumper. Dave emerged from his boat in true James Bond style “shaken but not stirred”. By this time Di had joined us to advise the whole beach was being pounded by huge dumpers and of 35 knot NW winds tomorrow. Decision time: it was late in the afternoon, no satisfactory tent sites, exposed beach, conditions visibly building and discomfort guaranteed.

A radio call to ACRAM confirmed winds and a strong wind warning issued. The decision – launch (through that shore break) and paddle 5km to the safety of Canal Rocks – quickly. The launch order would be Kelvin, Rod, Dave and Jim. Kelvin lined up on the steep beach with the rest of us ready to push him off. The lull came, he was off and out successfully. This pattern was followed for all launches however for Jim, he only had one remaining person to assist him – Di. They had to wait at least 10 minutes for a lull between the huge curling dumpers, and then it was one big push to get Jim clear.

Dave and I held station off the beach waiting for Jim to launch. A two metre wave caught us by surprise; we turned and paddled at it. The wave broke directly onto our bows and we disappeared in the soup, and fortunately came out the other side still upright. It was a hasty paddle to Canal Rocks.

Di was waiting for us when we arrived. In big swell and wind, Canal Rocks is really a spectacular sight. We shuttled boats and wet gear to the Caves Road Caravan Park for a layover day.

Warm showers, tent site with no sand, picnic tables at hand, cappuccino and the best egg burger ever not far away, sleep in and the Bramley camper nearby. We did enjoy the day off. Checked, cleaned and dried gear ready for launch tomorrow. Went to a viewing point overlooking Smiths Beach and Yallingup- there’s no way anyone would want to be out there today. The forecast for Friday was looking good.

We returned to Canal Rocks to continue in good weather and large swells. The main highlights being the approach to Sugarloaf and rounding Cape Naturaliste. The breaking waves at Sugarloaf were pumping so we kept a wide path of them and the three bears surf break nearby. I did not want any mishaps on our last day. Rounding Cape Naturaliste was in high and sometimes tricky swell conditions. Once past Naturaliste we paddled to avoid bombies and reef on the approach to Bunker Bay. The landing at Bunkers was text book and as usual Di was there to greet us.

I was fortunate to lead a group of very experienced paddlers who have the ability to apply their skills instinctively. If you want to pick up good information then make sure you paddle with Dave, Di, Kelvin or Jim sometime.

The C2C is a great adventure for the experienced and prepared paddler. I believe this is a trip should be scheduled once a year specifically for those paddlers who are prepared to continue improving their skills and build upon their bank of experience. The following points and suggestions come from the inaugural paddling team over coffee (lay-over) Thursday at the Caves Road Camping Ground.

The list is not definitive and is in random order.