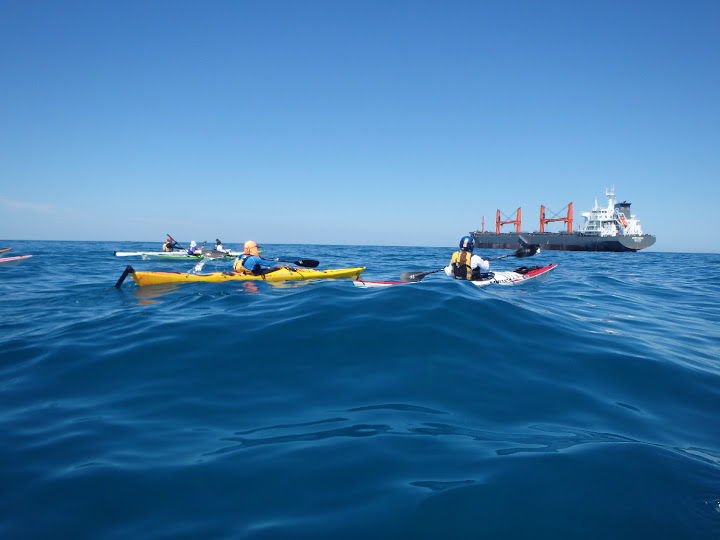 Once again our annual trip to Rotto had arrived. With a little anxiety all week we checked the weather expected and for once it looked like it might be just perfect both ways. There were ten of us: Les Allen, Jill Sievenpiper, Kevin Johnson, Dave Tupling, Russ Hobbs, Royd Bussell, Linda Glover, Pete and Heidi Hutton and myself.

For the first timers it was great to have the easy conditions for the trip over with a breeze coming from the south at 10 knots which dropped to not much at all midway. As per usual we arrived not long after 3 hours and had our usual coffee and eats at the Dome café as we are not able to get into our very nice house until after 12. We did some shopping for our barbecue in the evening.

It’s always nice to get away with an interesting group of people with whom you feel very comfortable. The evening was full of stories and jokes. Dave Tupling was entertaining and is never short of a word!! Now what was it – yes we were intrigued by the electric fence which cured people of the Ross River Virus.

Pete and Heidi also told us entertaining stories including their big adventure paddling the Murray River in South Australia. Everyone else had stories of their own about their experiences – some unmentionable here.

We always book house no.152 which is the old officers house with jarrah floorboards and character features. It is on the hill overlooking the Thomson’s Bay settlement and we are able to pull the kayaks up into the sand hills below us.

In the morning we decided we would all circumnavigate the island clockwise. This is the usual way as you come home on the quieter side of the island. Conditions were good and Les was in the lead. We always internalize the mantra “DON’T FOLLOW LES” but conditions looked fine so we did. I always look ahead and look for bombies and breaking water away in the distance and I did see a bombie up ahead but after the distraction of talking with Jill I took my eyes off it. We were at the back of the field and the swell was of a reasonable size and I said to Jill “don’t worry its only swell and it wont be brea—-k——king.”      “B….B…go flat out at it” as it was the bombie which was curling over us which we only just scraped over. After we recovered our normal breathing rate we decided to watch more closely.

We rounded West End with not much fuss and for once the swell was not too big and it was relatively easy with Pete saying “where is West End?“, and we said “you have just been around it”. “O” this trip was going to be easier than we thought. Of course we spoke too soon. We noticed up ahead that Les had cut through what looked like a nice opening through to a bay. Linda and a few others went around the outside but I thought it looked ok and so Jill and I decided to cut through as did Royd and Kevin. We thought it was all fine until Kevin shouted” back up” and looking behind we saw a big wave about to break so we back-paddled furiously and made it over but Royd came out at the top. Kevin went to his aid with tow rope in hand and proceeded to lose it in the water as it sunk so he learnt the lesson that tow ropes need to be able to float. Royd was really quick to get back in his kayak and didn’t need much help to get in. This was lucky as another beauty of a wave was heading their way. Kevin suddenly appeared at the top of it with Royd close behind and they just made it over. We were weaving in and out of the beautiful bays and trying to paddle quickly over reef to avoid the surf but again we forgot the mantra ”don’t follow Les” and next moment Jill was upside down near the reef. I was debating how to help her and then I was upside down – too shallow to roll. Dave Tupling was on hand to help us through.

We pulled into Eagle Bay for lunch stop and a large swarm of bees took a liking to Russ’s yellow kayak and filled his cockpit. My kayak was next to his and my yellow sail was attracting another heap of amorous bees. What were they doing there?? – there was no pollen around and couldn’t see any plants or trees. We had to be very careful on departure to push the kayaks out and make sure all the bees were out. Meanwhile, one was very angry with me and proceeded to sting me under my arm. I hadn’t been stung since I had anti-bee injections about 40 or so years ago when I was very allergic so we waited a bit and then proceeded on our way after I seemed to be breathing normally.

We wondered what else was going to happen. Well – not long after when we were approaching Stark Bay I suddenly yelled out because another rotten bee must have been hiding in my cockpit and this time stung me on my leg. We decided to land and hang around on the sand near the boats in case I needed an emergency trip to the first aid tent but – no – the sting didn’t cause any major dramas and we were on our way.

Toward the end of the northern side we were able to put up the sails and scream along. We watched those on the inside blindly following Les and as they rounded the corner Linda’s heart was in her mouth but they all survived the breaking wave. Under sail we nearly came aground but sped over reef so fast the waves couldn’t catch us.

It was a great day with time for coffee and a relax around the settlement. We dined in the settlement that evening and then went home and sat around and discussed the day’s adventures. There was a big storm with lightning flashing so we weren’t sure what was going to happen for the paddle back next day. Luckily, the weather was okay.

The trip home on Sunday turned out to be the first time that a whole SKCWA group had paddled to the island, paddled around the island the next day, and paddled home on Sunday. Well done to a great group of people. We began the trip home into a slight head wind that turned south as we moved along. We all travelled at a good pace and managed the trip in under 3 hours. Everyone stayed together as a group and it was not until the last few kilometres that we were able to benefit from our sails. Apparently the people on the shore at Port Beach couldn’t work out what it was that was coming in, as with the sails up we looked like a great Armada approaching.

For anyone who hasn’t done this trip I recommend it as a great learning experience and a great challenge with the added benefit of great camaraderie.