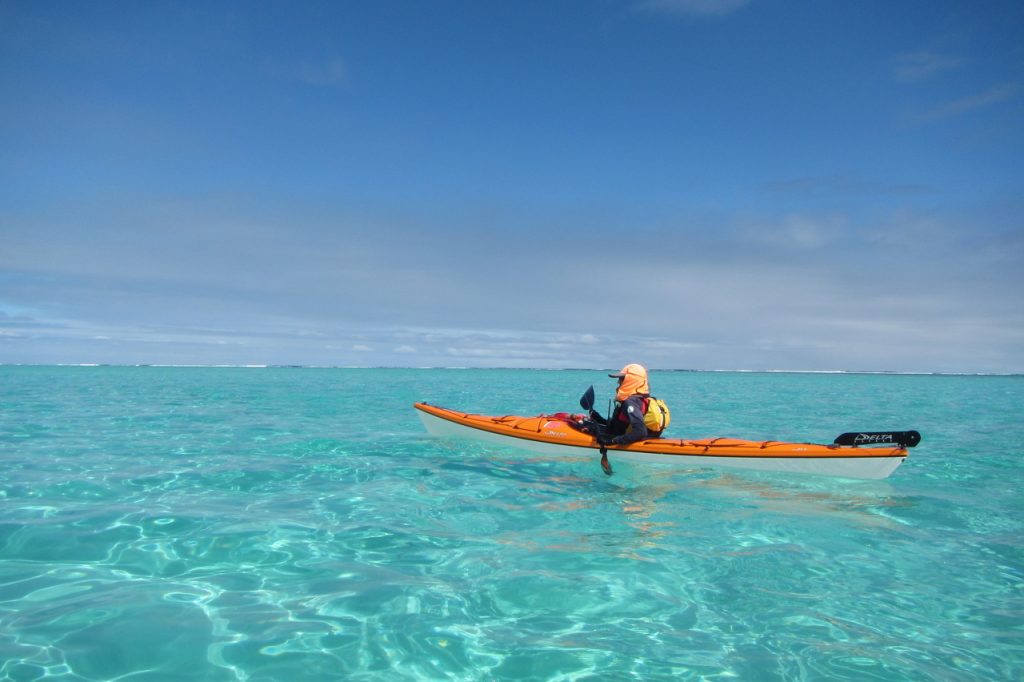 Escape from the Pandemic – paddling at Ningaloo, August 2020

While unfortunate Victorians and much of the world were in lockdown due to the COVID-19 pandemic, in August a group of club members and partners headed north to Exmouth and Ningaloo for a week of paddling and other outdoor activities. Organised by Pel, the trip had originally been planned for May but had to be postponed due to travel restrictions at that time.

Having survived the drive up through strong winds, dust storms and heavy rain, members of the group turned up at the crowded Yardie Homestead Caravan Park. Everyone commented on their fuel consumption, due to the strong northerly winds and our laden vehicles, being alarming.

Richard had spent a week there already, enjoying good weather and the charming women at the next campsite!  Others in the group were Pel and Julie, Paul Cooper, Wolfgang, Brenda, Steve and Leonie, Steve and Davina, Tony Hubbard, Martin, Sue and Russ and late arrivals Dave Oakley and friend Allan.  The gusts the first evening as we set up seemed even stronger than winds that Exmouth is known for, but somehow we managed to keep our tents and other gear from blowing away. While it rained, we all headed to the café for an easy first dinner.  Paul must have charmed the chef because his serving of roast dinner was twice the size of anyone else’s!

With winds reduced to a breeze, next morning we met at the café and sipped excellent coffees while we planned the coming week. Wolfgang was well prepared with maps, ideas for paddles and past experience of conditions. The rest of the day was spent going for walks, checking out the surf conditions at Wobiri Beach and generally settling in. That evening we started our daily habit of meeting at 5pm for drinks and snacks, to share stories from the day and enjoy the sunset.

After a clear and spectacularly starry night, the morning was calm and a comfortable temperature. We headed to Ned’s Beach and launched under cloudy skies at the civilised hour of 10am to paddle northwards in calm conditions to Mangrove Beach. At least one stingray was sighted, leading to some poor taste Steve Irwin jokes from Richard. From there we paddled out to the reef edge where lots of fish, corals, sea cucumbers etc were visible through the clear water. Fun was had playing in the waves coming over the reef edge. And we continued back to Ned’s Beach in sunshine. Trip distance was 12.6km, taking 2.5 hours. The afternoon was spent snorkelling and other activities before sunset drinks.

Next day another 10am start (why rush when you are in paradise?), this time from Lakeside. Just 6 paddlers headed off to the south towards Turquoise Bay. The water was rough and turbid with a southerly current and the wind increased to 12kt. Despite the conditions we could still see lots of turtles surfacing (and hear Brenda whooping with excitement!), stingrays, fish and corals. Crashing waves created a constant roar out on the reef edge. The cloudy conditions cleared and we had a pleasant lunch break in sunshine at Turquoise Bay. The return paddle was faster in following choppy seas, arriving back at Lakeside at 1:30pm. Total distance 16.1km. Dave Oakley had just arrived with friend, Allan, and joined us for drinks.

Another windy night and morning, but it was OK for venturing south to Yardie Creek to paddle up the gorge. It is a short (2.5km return) trip but spectacular with glowing red cliffs in the morning light and a good number of Black Flanked Rock Wallabies spotted on the sides of the gorge. Some chose to walk the trail above instead of paddling so were able to look down on our colourful kayak group below. Lunch under the trees was supplemented by a slice of fruitcake to celebrate Sue’s birthday. In the afternoon people went walking or snorkelling and again met up for drinks, this time with music from around a nearby campfire.

Waking to a sunny day at last, most of the group drove to Sandy Bay where Pel erected a shade structure. It was intended for Julie but we all managed to crowd in out of the sun. Some ventured out in kayaks to the two snorkelling moorings to the south-west and then paddled further out to the reef edge where the marine life was outstanding. Others snorkelled at Osprey Beach, enjoying the varied fish life and green turtles or relaxed in the shade. Davina had an injured wrist so had come up with a method to wear a paddle float to protect her wrist while snorkelling, making her look like a large snapping shrimp as she swam!

Wolfgang and others ventured out in kayaks after lunch. A sudden commotion turned out to be dolphins repeatedly chasing a school of large fish across the lagoon, with the fish leaping out in splashing arcs. Perhaps the dolphins were using Wolfgang’s kayak to trap the fish, but he found himself in the middle of mayhem and was ‘eyed’ off by a dolphin after being hit by three escaping fish. Two of the hits were on his PFD but one was to the side of his chest, leaving him with three fractured ribs.See Wolfgang’s fishy tale at the end of this post. Despite his discomfort he said that the experience was worth the pain! That night we all ate out at the Yardi Kitchen café and had a very pleasant and social evening.

All week we had been awaiting news from Martin about the impending birth of his first grandchild. News this morning was that a little girl had arrived safely and with hearty congratulations from us all, Martin and Tony started the return drive to Perth, as did Steve and Davina. Brenda had also headed into Exmouth to stay with a friend. Some took a commercial cruise to see wildlife, others had a rest day.

Some stayed on an extra few days to enjoy more of the delights of Ningaloo and Cape Range, with the others of us returning back to wintery Perth. It was an excellent trip with easy paddles and other activities in a World-heritage listed location, with great company and an awareness that we were just so very fortunate to have the freedom to enjoy a lovely holiday during a life-changing pandemic. Thanks everyone!

Here is an amazing story from Wolfgang who has had a very unusual kayaking experience  in Exmouth recently.

Hi Andrew,
I experienced a very unusual happening which occurred on the clubs recent paddle excursion to Exmouth.
Here is what happened :
It was a perfect day, our group of paddlers had finished an enjoyable paddle trip and we all had lunch on the beach of Sandy bay in the Ningaloo Marine Park. The ideal condition were so tempting that three of us decided to go back on the water to practise some rolling.

I was paddling in not more than 4 feet deep water, about 200 meters from the beach, when suddenly “out of the blue” in front of my boat, a swarm of fish were jumping out of the water and heading
in full speed straight towards my boat. The fish were chased by a dark shadow which turned out to be a large bottlenose dolphin.

Just a few feet in front of my bow the swarm jumped out of the water  and at least three of the fish hit me in full force on the chest. The fish, about one foot long had a distinct yellow tail fin and weighted close to a kilo. The chasing dolphin passed the left side of my boat only inches away, the spray coming from his breathing hole hit my face, and I will not forget how his left eye was looking at me.

The impact on my chest was like being hit by hard punches. Fortunately my PFD partly softened the force except on my left side were I felt a sharp pain. The whole happening was over in less than a minute and was fully watched by the crowd on the beach.

I was so stunned by the fast approaching armada of silvery torpedos aiming straight towards me, that I was unable to react in any way until it was all over. It was certainly an experience of a lifetime, which could have had a more severe outcome if the fish had hit me in the face or neck.

On my return to Perth I had to see a doctor as pains in my chest, caused  by the impact, became worse by the day. X-rays confirmed that 3 of my rips are fractured. The bad news is now, that no paddle activities are recommended for a while.