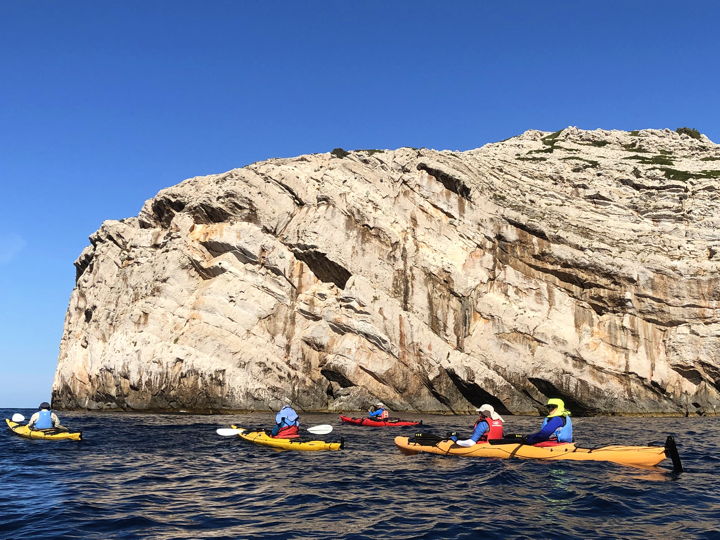 Continuing a nice tradition of overseas paddling holidays that started with a trip to Fiji in 2012, a small group of club members and partners paddled together in Croatia in September 2019. It was a fairly luxurious trip based on a yacht with cabins for 8 guests. The trip was run by Southern Sea Ventures, but subcontracting to a local company Sea Kayak Croatia, with the owner Yogi as our kayaking guide. Our home for the week was the yacht Vila Vrgade which is owned by the skipper, Dejan and his wife, Tina who was our cook. All three were terrific hosts, friendly and full of information.

The paddling was not challenging, but very pleasant, and the water was wonderfully clear and the famous azure of the Mediterranean and Adriatic Seas. We paddled along the shores of some of the outer islands, and also up into a long inlet on the mainland, with the yacht moving us between paddling areas. Croatia is limestone karst country, and some of the outer islands are edged by imposing cliffs. The landscape is harsh but interesting, and it’s amazing that it has been productive for fruit and vegetables for centuries.

We started the cruise in Split, and motored out on the Vila Vrgade to an island called Solta, mooring overnight at Rogac. The original plan was to head further out to the island Vis, but forecast storms and the risk of being stuck led to us heading for the more protected Solta.  Even so, our first paddle was lumpy enough to get us used to the individual handling of the kayaks.

After our paddle we reboarded the Vila Vrgade for delicious lunch, followed by siestas as we motored back to the mainland to shelter at Rogoznica. Croatia is a famous place for yachting, so we were lucky to get an overnight berth there as the yachts were crowding in to take shelter from the wild conditions offshore. Paddling was not an option the next morning so we wandered through the village checking out the resort and ‘gentlemen’s club’ and stopping for mandatory morning coffee. In the afternoon, the Vila Vrgade took off to the northwest in the rough conditions to anchor at Lavsa in the Kornati group of islands, most of which is a national park. As we arrived at our mooring, a severe thunderstorm saw the drenched crew rushing around to anchor us safely in a very narrow bay.

Then it was good weather at last, so we launched from the Vila Vrgade to paddle in the open ocean into 7 knot headwinds and 1m seas past numerous islands, some with spectacular cliffs, ending up on Levrnaka. Over the next few days we paddled some more among the Kornati islands, motored back to the mainland (Vodice), paddled past a 15th century fort and into the Krka River inlet past Sibenik, Zaton and ending up at Skradin.

Meals onboard the Vila Vrgarde were wonderful, sometimes with fresh seafood caught by Dejan the captain, and expertly cooked by his wife Tina. We were also treated to local venison, handmade pork sausage and wild fungi, all washed down with beer or wine of course!

Our excellent, well-informed and amusing guide, Yogi delivered us all to the coastal city of Zadar in his van crammed with gear and loaded up with kayaks for final farewells.

We enjoyed the historic sites of Zadar before heading off in different directions to take in some more of Europe before returning home.