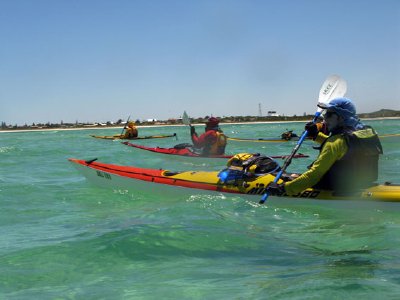 Ewen coming in to land at Camp 1. Photo John Radovich. Pel and Rob relax and share a few stories at Camp 1. Notice all mod cons: BBQ and ironing board. Photo John Radovich. 
The aim of this trip was to kayak from Lancelin to Cervantes over the CHOGM weekend, a distance of 66km.

Six paddlers decided to complete the trip – John Radovich, Dave Oakley, Paul Cooper, Rob MacCracken, Ewen MacGregor and Ken Burton. The paddlers were provided with land-based support by Pel Turner up until Saturday morning and Steve Foreman from start to finish. The 4 Wheel drive support was awesome and thanks are extended to Pel and Steve.

Paul, Ewen and Ken arrived at the Lancelin Caravan Park on Thursday night and after setting up camp on the road verge retired to the local hotel – a mere 10 minute walk according to the caravan park owner – this guy had no idea of distance or time and after a 40 minute walk our thirsts were raging! Coopers on tap was the order of the night! After a few pints and a reasonable meal we walked back to the camp at around 2200 hours and hit the sack.

Up at 0530 the next morning (Friday) the 3 of us showered and waited for the others to arrive. The initial idea from John was to complete the car shuffle and be on the water at 1000 but this stretched out to 1120 and by then a serious wind was up and blowing hard from the southwest. John delivered his briefing in a clear and succinct manner, issued each paddler with a map and safety kit and then Dave outlined the Club’s “Shark Sighting Policy”. A few comments such as ‘slowest paddler gets eaten’ and ‘if you see a shark every man for himself’ rang out across the group!

We set off at a leisurely pace heading to Wedge Island, a distance of 26km. The following sea was impressive and most of us spent the hours ‘broaching’ and trying to keep in a straight line. The wind really picked up after the first break on a nice beach adjacent to Narrow Neck Reef. KB decided to use his sail and after breaking through a small surf break we were off towards Wedge Island. The seas were very rough and with the wind made paddling as a ‘group’ quite difficult. We persevered and pulled into a very nice campsite selected by Pel and Steve. The campsite was 3km short of Wedge but as it looked so inviting and was well protected the choice was a good one! We made camp at 1600 hours and shortly after getting the tents up and the boats stowed Steve and Pel had a great BBQ going and we had cheese and bickies and a quiet drink.  Most paddlers went to their tents around 2100 with the call to be on the water at 0800 the next day. We woke to a nice offshore breeze and paddled the 3km to Wedge Island and surfed some nice little waves over the bank at Wedge and into a beautiful bay. We had a few stops while the offshore breeze was blowing and enjoyed the calm water and the inshore reefs until about 1000 when the wind started to change and by 1100 had picked up to a 20-25 knot southwester.

The paddlers were amazed at the “Mad Max” type efforts by 4 wheel drivers, motorbikes and even a 2WD Commodore and Falcon (both most likely were stolen) doing over 100kph along the beach with the Ranger chasing them with his yellow light flashing with no hope of catching them. It was like another world watching these idiots using the beach in this way!

As we got closer to Hangover Reef Steve decided to find a landing spot for lunch. The group, who at this stage were tending to go outside the breaking waves made a decision to go through a small section of lumpy but non-breaking swells to get access to the beach. Ewen and Ken were not keen on going inside and suggested the group go outside and around the reef and then into the site. John decided that the group would go inside and so the first 4 paddlers set off in single file watching the incoming waves and after a bit of manoeuvring they all made ‘safe ground’.

Ewen and Ken started coming in on the same line when suddenly the gap in the non-breaking wave section closed out and Ken had to surf off the first wave and then Ewen and he had to paddle like maniacs to get over another monster that was foaming at the top – they got over that one and realized they were in the middle of the ‘kill zone’ because another monster was starting to peak and threaten to break on their heads. Ken was screaming and Ewen was just saying ‘paddle harder’. They got over the 4th and final monster and into manageable water and then skirted around the outside of the reef whilst keeping an eye on the inside paddlers. After a few kilometres we met up and exchanged our horror stories with embellishments. The learning point here is that conditions can change in an instant and all paddlers have to be prepared to make life saving changes very quickly.

After this epic we continued paddling towards the Grey Shacks. Putting the tents up just north of Grey was very hard and most people needed assistance – the wind was so strong that we and the boats were covered in sand. We settled around Steve’s 4 Wheel Drive but even the car offered little protection from the sand and the wind. We eventually found a ‘wind-free’ zone where we started cooking the evening meal.

We awoke on the Sunday morning to a wind that was still quite strong but coming from the south so at 0810 we headed to Cervantes and stayed inside the reef system for the first hour and a half. A few seals, a school of mulloway and a small reef shark were the highlights of the morning. We landed for morning tea and caught up with Steve once again. The wind had died off a little but was still 12-15 knots with a following sea. Ken was spinning a lure and managed to catch a nice bull herring but missed two big hook ups on serious fish. The group paddled in an arrow head formation and kept together well on this day as we headed towards Cervantes. We arrived at Cervantes and Steve was waiting on the beach with a brew going – nothing is too much trouble for Steve!

After packing up the gear and getting organised we all retired to the Tavern for a well earned lunch and some great story telling about this memorable trip.