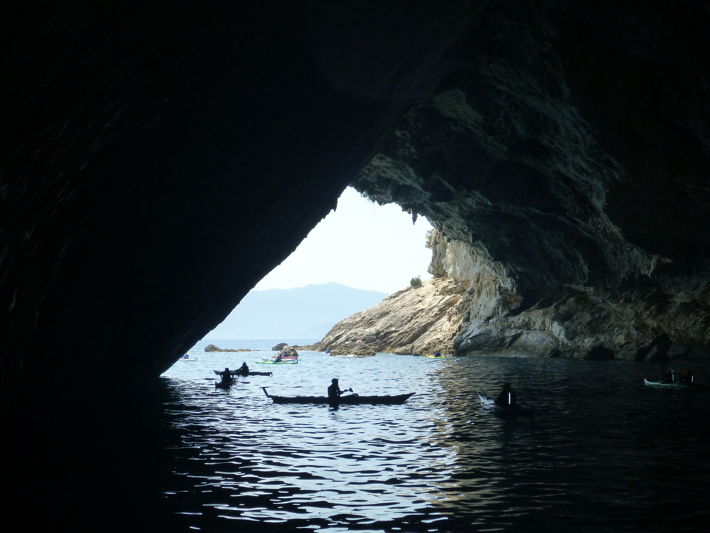 By Sue Harrington and Pel Turner

Judy, Barb Manson, Jo Foley, Wolfgang Wetzig, Pel Turner, Russ Hobbs and Sue Harrington from SKCWA were joined by Jo’s friend, Nicki Thomas. Anastasia, John and Glen from Newcastle, NSW made up the group, along with Pavlos and Yvonne as trip leaders.President Judy Blight’s descriptions and photos of her kayaking trips in Greece have captured our imaginations over the years, so we jumped on her suggestion of a group trip. Arrangements were soon made with Yvonne and Pavlos at Sea Kayaking Kefalonia, with whom she had enjoyed wonderful trips twice before. We signed up for the nine-day Ionian Odyssey trip, starting at Kefalonia and paddling between various islands in the Ionian Island chain in the western part of Greece. It was to be a cushy trip, staying in nice accommodation with breakfasts and dinners in village tavernas and picnic lunches on the beaches. After having travelled from Athens or other European adventures, we all arrived at our comfortable apartments in Vlachata, Kefalonia, the base for Sea Kayaking Kefalonia. On a hot afternoon we gathered to introduce ourselves over the first of many cold beers, received a trip briefing from Pavlos, met the other staff and the family dog, Goofy, chose kayaks and gear. Pavlos had tried his hand at woodworking and made two Greenland paddles for our use (though Wolfgang recommended some fine tuning) and a large outdoor table for meetings. Feeling the heat after standing around in the sun, we headed off for another beer and the first of our convivial dinners.

Our excess belongings stored, we were picked up the next morning for the drive to Fiskardo on the northern tip of Kefalonia. On the way we passed pens of Sea Bass and Sea Perch and evidence of the 1953 earthquake, which destroyed many villages, now re-built. Interestingly, the buildings in the Ionian Islands tend to have cream walls and brown terracotta roof tiles, more like Croatian architecture than the typical blue and white of the Aegean islands. First paddle day. Having arrived at the pretty village of Fiskardo we had a short (5nm) introductory paddle to the south, circling a limestone island rookery of yellow-legged gulls and having the first of our healthy and delicious beach picnic lunches. Of course there was some pleasant snorkelling and kayak rolling in the crystal clear water before we headed back to Fiskardo. We noticed this day and throughout the trip that the incredibly clear, blue-green waters supported little marine life, perhaps because of over-fishing. Our Newcastle companions taped large inflatable Tele -Tubbies to their kayaks as mascots that, not surprisingly, got some looks from the locals. The mascots didn’t last the distance though as they couldn’t cope with the wind. The evening activities became a welcome pattern. We would settle into comfortable apartments with water views or nice gardens, rinse out paddling clothes, shower – Greek bathrooms often don’t have shower screens or curtains so water goes everywhere – have a short break and then head out with the group for beers, dinner and lots of chatter at a taverna. Sue and Russ added to the cacophony with their coughing, due to a lurgy they had all trip!

After a leisurely and decadent cooked breakfast we checked out the ruins on the point – a Venetian lighthouse and 6th century Benedict ruins – and then loaded our kayaks, gear and ourselves onto a ferry going north to Vasiliki on Lefkada Island. After finding the usual access to the water was blocked by a construction site we had to carry our gear and boats to a rocky bay. Here we launched for a calm and pretty 9nm paddle eastwards to the village of Sivota, set in a long narrow harbour full of tourist yachts. Today we surprised Wolfgang by singing happy birthday at lunchtime on a beautiful little beach while he was surrounded by beach babes! Then there was a cake and candles at dinner. Tonight started a regular pattern where Yvonne would save our fish scraps and feed them to needy cat families of which there was always an abundance! End of the day at Spartakhori – Photo Russ Hobbs Heading down to the glistening harbour from our apartments we passed by the village church and the music of Sunday hymns and on to yet another lazy and delicious breakfast. We launched watched by a family of ducks and some yachties onto shiny, calm seas and headed north-east past spectacular, banded and folded limestone cliffs. After a short crossing to Meganisi Island we paddled south past more stunning cliff-lines and into many caves. Pavlos entertained us by rolling underwater and paddling in his upturned kayak, arms and paddle above the hull, ostensibly as a method for passing beneath a low cave entrance. We ate our lunch picnic in the huge Papanicolis cave where a Greek submarine hid during WWII, emerging at night to attack German vessels. In the afternoon we backtracked northwards up the western side of Meganisi Island and into the protected harbour of Spartakhori, making a total of 9nm for the day. After cold beers at a cafe on the beach, we climbed up a steep hill to our accommodation in the old village, while our gear was driven up in a classic old Datsun ute by the lady owner of the apartments. Dinner was at a nearby taverna owned by an old lady who had only recently stopped doing her usual party trick (remembered by Judy from a previous trip) where she would walk around the taverna with a large table balanced upside down on her head!

Today we did a return day trip of 8nm from Spartakhori to the island of Skorpios, previously owned by Aristotle Onassis and more recently by a Russian owner. Security was high, with guards appearing from nowhere as we paddled by. After paddling around half of the island we were turned away by a security guard from a wide beach previously accessible to tourists, and paddled back to land on the only remaining, small, public beach. There we had a restful lunch, snorkelling, rolling and skills practice, with the additional feature of standup paddling, achieved more successfully by Yvonne and Pavlos than by most of us! We returned to Spartakhori for a second night in the same comfortable apartments. The only public beach on Skorpios Island – Photo Russ Hobbs

Spartakhori to Kalamos. After a breakfast of banana, beautiful Greek yoghurt and pastries we had an early start. It was lazy paddling in glassy conditions with misty views of mountains and islands as we headed east across the northern coast of Meganisi. We took our time as we moved past the creamy cliffs, attractive coastal vegetation and charming islands. The 5nm crossing to Kalamos Island was easy paddling in flat conditions. Barb and Pel north of Meganisi – Photo by Sue Harrington

The coastline along the northern and eastern sides of Kalamos Island delighted us with caves and cliffs of limestone, sandstone and conglomerate containing shells and corals, topped with clumps of slender, green Mediterranean pine trees and high peaks rising above, with the occasional brave goat on the steep slopes. Across the strait we could see the multi-rise apartments of Mitika on the Greek mainland. Judy, Jo and Pel off the cliffs of eastern Kalamos – Photo by Pavlos Georgilas

After a couple of swim breaks, punctuated by a new kayak game trying to shoot a flat basketball into the hatches of the boats, we paddled past some disused, picturesque flourmills into the village of Kalamos, having covered 14nm for the day. We settled into our apartments, enjoying great views over the harbour, before walking past olive groves into the village for drinks and dinner overlooking the water. Cats are everywhere in these villages and a cat fight and aerial acrobatics provided some entertainment. Kalamos to Vathi. An early start again so Yvonne delivered warm cheese and spinach pastries for breakfast before we headed to the harbour. Conditions were similar to yesterday, with mist over mirror-smooth water. We crossed to Kastos Island and paddled down the protected east side with endless folded and tilted limestone cliffs, caves, small pebbly beaches and wind-bent Cypress pines. Kastos village at the southern end of the island was an opportunity for coffee and fresh orange juice before making the 5nm crossing to Atoko Island (the end of the day’s 11nm paddle). Judy on the crest of a wave, crossing to Atoko Island – Photo by Russ Hobbs

There was some swell and wind chop initially (~8 knot wind). The group separated into several smaller groups and later Pavlos gently reprimanded us for not staying together. There was time to swim and empty the gear from boats before our water taxi arrived. Pavlos and others removed the rudders from the kayaks to prevent damage. Most of our group travelled in the first water taxi to Vathi, the capital of Ithaca. The taxi returned to bring the boats, plus Pavlos, John and Glen, to a cove on the other side of Ithaca, where they unloaded the kayaks and swam them in a short distance to shore.

We settled into the wonderful Odyssey apartments, with views of the fjord-like bay and Vathi township, and did the usual clean up of our gear and ourselves. While luxuriating in the shower, Judy failed to notice that the shower curtain had blocked the drain and she flooded her and Barb’s room. Fortunately they had lots of towels! Everyone walked into the town for drinks (and to watch Australia and the Netherlands playing World Cup Soccer) and to do some tourist shopping before having yet another delicious Greek dinner. Sue, Wolfgang and Pel enjoying the view from the apartments at Vathi – Photo by Russ Hobbs

Ithaca day. Today was a non-paddling day and the chance to see some of Ithaca Island. Breakfast on the terrace was a selection of beautiful breads, cakes and pastries made by the owner of the apartments. Then we piled into three hire cars and drove north from Vathi, past stunning coastal scenery, stopping for a tour of the 800 year old Katharon Monastery. From here we drove to the Stavros Museum where we marvelled at archaeological treasures dating back to 2,000 and 3,000BC, including items associated with Odysseus and his return to Ithaca. We continued on to the charming coastal villages of Frikes and Kioni, where we had time for lunch and shopping. Back in Vathi for dinner and an overnight thunderstorm and heavy rain. Vathi to Sami and Vlahata. We loaded our gear into the cars and drove to the cove where kayaks had been left. Pel, Russ and others re-assembled the rudders while we packed the boats. Heavy rain and lightning caused us to wait in the cove until the worst of the storm had passed, but then we were able to paddle south and then west around the end of Ithaca. Waiting out the rain – Photo by Pavlos Georgilas

After a short break we crossed the 3nm strait towards Kefalonia in 15 knot winds with side-ways wind gusts and then into strong, gusty headwinds as we approached Sami, our final goal. The three other guides from Sea Kayaking Kefalonia arrived with the vehicles and we had a picnic lunch, presented Yvonne and Pavlos with Greenland paddles as thank you gifts and drove back to Vlahata. There we had a final dinner and farewells. So ended a marvellous overseas paddling holiday. We all had a fantastic time, with everything well organised, spectacular scenery, mostly excellent weather, great food and company. Thanks, Judy, for sharing your Greek paradise with the rest of us! And thank you, Yvonne and Pavlos, for your friendliness, professionalism and eye for detail; we’d highly recommend Sea Kayaking Kefalonia.

Postscript – A recent celebration of our Greek experience was a dinner held at Sue and Russ’s in late July where we dined on Greek delicacies contributed by everyone, washed down with the famed Mythos beer, and relived the fun times spent on our Ionian Odyssey.