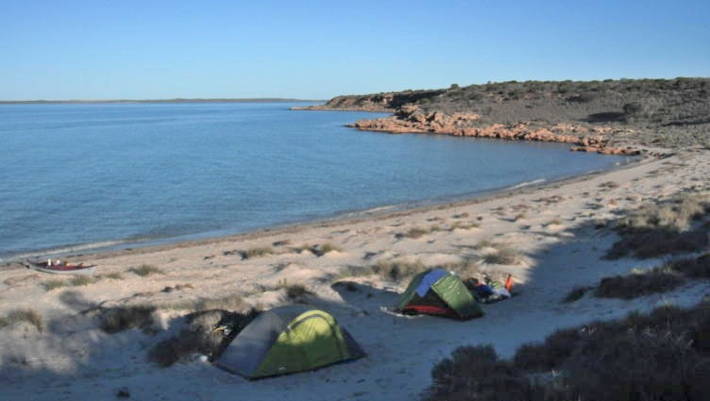 Since undertaking a solo two day paddle from Denham around Cape Peron to Monkey Mia last year I was eager to visit Dirk Hartog Island (DHI) on my next trip to the Shark Bay World Heritage area so I asked a paddling friend of mine, Lance Connop, whether he would be interested in joining me for a discovery paddle of the eastern side of the island. We invited two other experienced sea-kayakers in Paul Cooper and Graham Place to join us, set the dates and booked accommodation in Denham.

Lance called around at 0430 hrs on Tuesday morning the 14th May in his ‘Landy’, as he calls his Land Rover, and we loaded up my gear. I weighed my gear before we left and it came to 85 kg. Most of the weight comprising water for the six (6) day expedition allowed consumption of four litres per day totalling 24 litres. The other guys were carrying similar amounts. Water is the single heaviest item to carry as it weighs 1 kg per litre, therefore weighing in at 24 kg – 3 kg more than the weight of my sea kayak. The sea kayak that I use is the same one that Freya Hoffmeister paddled around Australia during her ‘epic’ adventure in 2009 – an Epic 18x Sport, except mine is slightly lighter than her Expedition lay-up. I had only used it previously for an overnight paddle from Mindarie to Lancelin so I was eager to see how she went loaded up to the maximum storage capacity of 173 kg.

After a long road trip we arrived in Denham ten hours later and caught up with Paul and Graham who had left Perth the previous day for a more leisurely trip to Denham. We booked into our accommodation at the Denham Backpackers, which is just across the road from our launch site. After a hearty meal at the local resort we retired early for the big first day paddle of 37 km across Heirisson and Bellefin Prongs to our first campsite just south of Tumbledown Point.

It took us about 90 minutes in the morning to pack and I was the last to launch after notifying Australian Coast Radio Monitors WA INC. (ACRM) in Denham of our planned route and ETA for arrival at each prong and also at DHI. The first paddle to Heirisson Prong equates to approximately 20 km (a similar distance to Rottnest Island from Cottesloe). I was a little anxious as the whole area is teaming with everything that can bite and/or cause you harm – most notably the large Tiger Sharks that frequent these waters.

We made it to the first prong in little over three hours and had a short leg stretch before moving on to the next prong. We stopped there for some lunch and then headed over to DHI. I didn’t have a waypoint in my GPS for the first campsite so we basically guessed where it might be located. When we arrived at the island we discovered a lovely bay with good sand to land on and plenty of space to set up our tents.

Lance is an eager fisherman and before any of us had unpacked our kayaks and set up our tents he was off to the nearest point to throw a line in and try his luck. Needless to say it was fish for dinner. We all slept well that night, and successive ones, retiring at 1900 hrs and rising at dawn each day. Paul and Graham wanted to spend two nights at that spot so we agreed and did a day paddle to Notch Point and Tetrodon Loop the next day. On the way north I came across a beached dugong and pulled up on the sand to investigate. The poor dugong may have been hit by a boat and some sharks have then moved in on the weakened mammal. We pushed it into the shallows and off it swam with what appeared to only be a ‘flesh wound’. This was a relatively easy 24 km paddle to the point for lunch and return. Paul and I split up from Lance and Graham for the return paddle and when we arrived back at camp they were nowhere to be seen. Ninety minutes passed before they appeared back at the campsite much to our relief. With an empty boat that day I was averaging 10 km/hr. On Friday 17th May we broke camp and set off southwards for Cape Ransonnet. This was an easy 16 km paddle to the next campsite which comprised a much smaller landing beach and far less clear space for setting up camp. The paddle plan was to spend two nights there, however after having climbed the nearest hill to get coverage from the Telstra Next G network and the latest weather information it was decided to drop our planned day paddle around the South Passage, out to Surf and Steep Points and make our way back to Heirisson Prong before returning to Denham. The weather forecast was not good predicting 20-30 knot southerly winds on Monday which was scheduled to be during our 20 km return paddle across from Heirisson Prong to Denham on open water. It was a shame that we had to cancel that part of the trip as the landscape and beaches forming the South Passage are stunning.

We broke camp on Saturday 18th May and paddled in a south-westerly direction to Bellefin Prong over Shoal Flats to the head of Blind Inlet. Lance was keen to explore that area so Graham waited for him to return whilst Paul and I headed for the tip of Bellefin Prong. The paddle up the western side of the prong was more like what I was accustomed to seeing in Shark Bay sighting many sharks, sea-snakes, large fish, turtles, stingrays, etc. We waited at the tip of the prong for the others to catch up with us before departing for Heirisson Prong where we would set up our final campsite. We arrived late in the afternoon and found a suitable campsite. The forecast weather was closing in and during the night some light rain fell. Campsite at the tip of Heirisson Prong

Early Sunday morning we broke camp and made the long paddle back to Denham. The wind was light and the paddle relatively easy. Lance was keen to get back and took the pace up a notch. It seemed to me that he was wanting to race. Suddenly he slowed and I wondered whether he had run out of puff or just given up trying to surpass the speed of the Epic 18x. When we got back to Denham he exclaimed that he had broken the steel cable on his Mirage 582 Tourer and lost control of his rudder. Lucky for him that it happened only a couple of kms out from Denham.

After emptying our kayaks and listening to the accounts of the locals citing large tiger sharks spotted recently at the town beach we booked into our room again and went looking for some real food. After a week of canned and dehydrated offerings the food and pints at the resort were very refreshing. The paddlers – Lance, Graham, Paul and myself

Once again we all retired early and left for Perth at 0800 hrs on Monday morning. We all concurred that it was the right decision to return a day early as the wind had freshened and the weather outlook looked bleak. The return drive to Perth saw some heavy rain and wind squalls around Northampton and Geraldton.

Back in Perth, after having washed and stored all my gear, I was already thinking about my next trip to Shark Bay next May to paddle up to Cape Inscription and fix my own humble plastic camp plate to a broken paddle shaft there somewhere for the next generation to inspect and subject it to microscopic analysis just like the old Dutch pewter plate mounted there in 1616 by Dirk Hartog.

A couple of days later Lance suggested that we do a return paddle to Rotto. What, I thought, just a leisurely 40 km afternoon paddle so off we went on Thursday.

‘Forget about the sharks’! (approaching Cottesloe)

The total distance paddled at Shark Bay was 134 km.