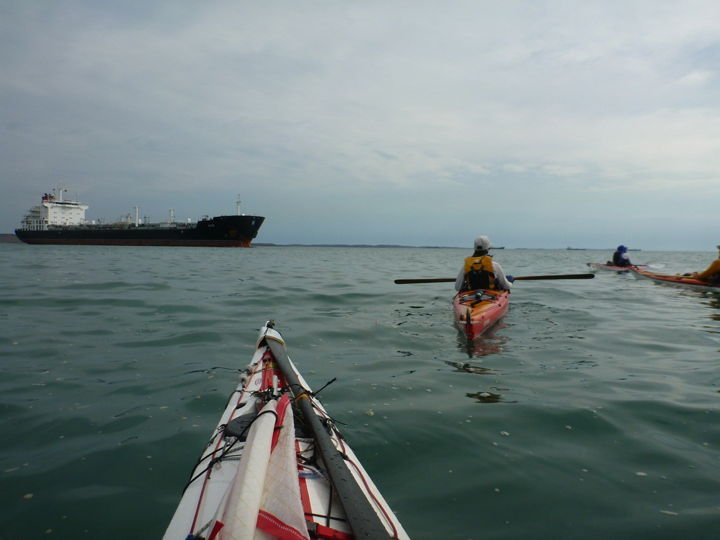 The alarm woke me from a fitful sleep at 3:30am. Normally a time to rollover and pull up the doona, I excitedly got out of bed to have breakfast before heading north from Safety Bay, pick up KP and rendezvous in Jurien Bay at 8:30am and start the journey to Dampier. KP and I joined Margaret and Austen for an early morning wake up coffee near the town jetty and just as it was served, in walked Jo and Wolfgang. The gang of six had gathered, no longer names at the top of emails, Dampier 2015, 7 years since the last club trip had become a reality.

Making 900km on the first day, we arrived in Carnarvon just on dusk where we were shown our little cabin at the Capricorn Caravan park. Wolfgang, KP, Austen and myself were in one small room with double bunks, realising that having four blokes in one small room could be a snoring disaster, I fitted my ear plugs before falling asleep. However it seems it was my fellow sleeping companions that needed ear plugs, with KP dragging his mattress and blanket to the lounge room to get some peace and quiet.

In the 1600km of driving done over 2 days, drivers swapped, passengers slept, driver and passenger talked, road trains zoomed and wide loads made for interesting and exciting overtaking. We made Dampier mid afternoon, camped at the Transit Caravan Park and KP checked out a suitable launching site a short distance away. The clunk and rumble of train carriages bringing an endless flow of iron ore, a claxton horn sounded with regular monotony throughout the night and in the distance, bright orange flames leapt into the air from the Burrup Peninsula gas plant. Despite all the distractions everyone slept well, excited to be in Dampier ready for the start of the expedition.

A low tide greeted us at the launch site on Saturday and there was a lot of carrying boats and gear to the waters edge. With everyone marvelling at their packing ability but a little apprehensive about whether they may exceed Archimedes principle, boats were soon bobbing merrily on the water. Wolfgang was using his skin on frame and had somehow managed to fill it with 6 days of
provisions, however he hesitantly climbed in, not knowing if his kayak would behave more as a submarine than a boat. Wolfgang had done well and the boat floated high with plenty of freeboard for bad weather.

Paddling against an incoming tide and a gentle head wind made the first days paddling a tiring affair. Skirting around the wharves  and giant ships tied to them, we made our way up past the industrial structures that make up the first half of the Burrup Peninsula. As lunch time approached, the rock walls protecting this massive industrial investment from the ravages of the ocean provided little chance of a landing and on seeing a small white sandy beach we landed for lunch. Just as I savoured the first mouthful of my much to be repeated lunch for the next six days, we were hailed by a worker and his mates in their Hi-vis gear, telling us we had to leave the beach. We hurriedly returned to our boats, woofing down what we could of our lunch and continued on our way.

On leaving the industrial environment, Jo spotted 2 sea eagles whose brown body feathers were as red and brown as the rocks which make up the landscape, it’s white head standing out starkly against the rocks on which it perched. A couple of turtles at some distance were spotted but too far away to really get our interest . By mid afternoon we had made the entrance to Sea Ripple Passage but the tide was against us even though it was an outgoing tide, local knowledge would be required to know flow patterns around the many islands at the end of the Peninsula.

We made camp on a large expanse of gritty sand at (20°31’31.83”S, 116°49’23.57″E) just inside the entrance to Sea Ripple Passage. The sky which had been turning a darker and darker shade of grey all day threatened rain, motivating all of us to establish camp and get on with the evening meal. We constructed a wobbly structure of paddles and tent flys, brought to keep the sun off us during the expedition but now used to keep the threatening rain off us. Under the tarp a variety of meals were being prepared with KP stirring sizzling onions and a mixture of fresh veggies for his evening meal, proudly proclaiming that this meal did not contain one item of tinned food.

We had been farewelled with good wishes by Royd and Linda, original starters for the trip but unable to make it due to the broken leg Linda sustained at the Jurien Bay weekend. Their lament made worse as early weather forecasts had looked very good for the trip. Unfortunately a trough had developed over the exact area we intended to paddle and predictions were now indicating a wet week ahead. Knowing the vagaries of a trough we thought it equally likely that it could dissipate and fine weather return.  Jo tried to challenge Huey by being a sun angel and using positive thoughts of endless sunshine but the Sunday morning dawned with the pitter patter of rain on our tents.  The weather forecast had worsened with a low pressure now developing to our north, rain of up to 100mm predicted over the next 3 days and 30 knots winds due to hit in a days time and then 20 knots the day after. Things were looking pretty miserable and the thought of being unable to cook hot meals and having 100mm of rain thrown at us at 30 knots  with our gear becoming progressively wetter, did not look appealing and it was decided to return to Dampier. We managed to snatch breakfast during a break in the rain but were soon sent scurrying back into our tents to wait for another easing of the rain. When the break occurred we quickly packed gear into our boats and awaited the turn of the tide to make returning to Dampier easier.

As we returned to our launch site, the rain had become heavy, we packed our wet gear into the backs of cars, no time to be precious about keeping anything clean, just glad to be off the water, we returned to the Transit Caravan Park and ran for the hot showers. Wet and bedraggled, we sheltered under the BBQ shelter to discuss our options for accommodation. With the big wet still to come in the following days, camping at the caravan park was a very uncomfortable option and this being  mining country, we knew that cheap accommodation was an oxymoron. The caravan proprietor kindly rang around for us trying to find something appropriate for our budget. Additionally she had brought out a full kettle of boiling water to supplement the kind couple who had come across and offered hot drinks all round. Slowly our spirits rose on the wonderful kindness being shown to us and the hot drinks soon had spirits high. Success! The Karratha backpackers had space for us. We offered money for the hot showers we had presumptuously taken, but the  proprietor kindly allowed us them for free. We cannot speak highly enough of the kindness we were afforded at the caravan park.

After a warm meal prepared at the backpackers Karratha, we gathered to consider our situation and the future of the expedition. We reviewed the weather forecasts but the trough just kept hanging around and Jo’s sun angel and positive thoughts had been rejected by Huey. The outlook was for wet conditions with probabilities of rain at 90% and greater. It would not fine up until the Wednesday and fresh winds were due to blow for the next few days. Whilst the backpackers was a comfortable spot to stay, we were 6 diverse people who had come together for a common goal of a 6 day expedition to explore the archipelago and it seemed the momentum and focus of the trip had been lost.  It was decided to return to Perth.

There is always a nagging thought that can eat away at you when deciding to pull the pin on an event. However as we headed south, the weather observations showed the rain and wind had come as predicted. We all contemplated the thought of being huddled in a wet tent, a leak somewhere making a rivulet of cold water pool under the sleeping bag and the cold, wet bag making time slow so that dawn and the welcoming light it brings take an eternity to arrive. Arriving at the Billabong road house , south of the Shark Bay turn off, gear was strewn over the handrail of the units to dry, the wet gear had started to build an aroma in the closed confines of the car!

I jokingly said to Wolfgang that we must have driven the equivalent of halfway across Europe, he replied “if you told anyone in Germany that you drove 3000km to paddle for 2 days they would think you were crazy!”

The Billabong roadhouse was a great surprise, with excellent accommodation and great meals. We toasted , or lamented , the end of the trip, three days after having clanged glasses, cheerily toasting to  a successful 6 days of expedition.

Thanks must go to Kevin Piper (KP) for putting this trip together and taking on the responsibility of  trip leader. Thanks to all the other paddlers, Margaret Banks, Jo Foley, Austen Mullen and Wolfgang Wetzig for being great company and paddling companions on the trip.