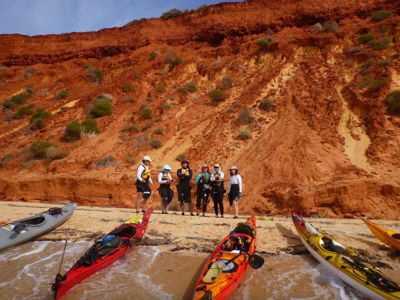 Food
It is always interesting to see what people bring to eat on these trips.  For future reference for people planning a trip I will mention some of the food eaten. Jo liked “Ainsley Harriot” Roast vegetable cous cous  with added packet of tuna or salmon.  For lunch each day she had a tin of “ St Dalfour” ready to eat salmon and vegetables or tuna and pasta. For breakfast Jo had packets of instant maple and nut porridge from the organic shop. I had muesli with powdered milk already in it in individual bags. Marg’s staple lunch was peanut paste on dry biscuit. Packets of Cup of Soup were popular after setting up camp. Neesha had “Marion Gransbys” packet food and Sharna had “Uncle Bens”. Judy and I chopped up carrots, onions, garlic, zucchinis added to rice with packets of salmon or tuna. Several people had the meals in a packet to which you add water and wait 10 minutes. If you have these make sure you try them before you leave home, as you should with all the food packets. You may not like the taste. You can end up with a terrible stomach ache if they don’t soak long enough. I had a piece of fresh fruit for every day. 4 litres of water per day per person proved ample, but it was not exceedingly hot.

[/vc_column_text][/vc_column][vc_column width=”1/2″][vc_column_text]After the long drive from Perth to Denham on Sunday we settled into our rented cabins at the Shark Bay caravan park then wandered down town to the pub for a very welcome dinner.

Early Monday morning our group of Sharna Farquhar, Neesha Copley, Ben and Margaret Toohey, Judy Blight, Jo Foley and Helen Cooksey were down at the foreshore packing our gear into our kayaks. How would it all fit in? Mark Alderson and his wife Jane and 3 children were holidaying in town so he came down with his kayak to accompany us as far as Big Lagoon on the first day. Before leaving we drove our three vehicles to Monkey Mia and left them in the car park. We weren’t charged to go in and leave them there. Mark obligingly transported us back to our kayaks in Denham which saved us a car shuffle at the end of the trip.

Monday 16.4.12
We left Denham at 10.12am. The weather was warm and sunny with a light SE wind behind us. By the time we turned into Big Lagoon the wind had increased in strength considerably and those with sails were flying along. We landed at 2pm on the south side where the 4×4 track comes in and met Mark’s wife Jane and the kids. Jane’s offer of cool drink and snakes was gratefully accepted and eagerly devoured. We left Mark there and crossed the lagoon and found a pleasant camping spot for the night.

Tuesday 17.4.12
On the water 9am to 3.30pm including morning tea and lunch stops. While we were packing up a group of kayakers crossed from the other side of the lagoon where they had been camping. They were heading further into the lagoon to camp the next night. We struck out into the already strong headwind. Fortunately once out of the lagoon we turned right and the SE wind was behind us again. We cruised along the west side of the Peron Peninsular marvelling at the brilliant red cliffs. The water was crystal clear. Every dark patch in the water could be a big stingray, turtle or shark. A lot of the sharks were about 2 metres long and swam at incredible speed once disturbed. The turtles would stick their ancient heads out of the water and have a good look at you before disappearing beneath the water. A beautiful  Brahminy kite launched off the cliff to check us out. We made camp on the beach just north of South Gregories.

Wednesday 18.4.12
On the water from 08.30 to 3.30pm. The tents were wet with dew when we packed up and the wet sand stuck to everything. It was pleasant paddling with the SE wind behind us until we rounded Cape Peron then the SE wind was on our nose as we paddled along the red cliffs hugging the shore line. We struck out across the bottom of Herald Bight to Guichenault Point. From the distance at water level in our kayaks it was hard to see the land sticking out from the cliffs until we were quite close. I had reassured myself by climbing the cliff with my binoculars at morning tea break. We had a great camp on a sandy beach in amongst the mangroves with surprisingly few mosquitos.

Thursday 19.4.12
On the water 08.40 to 3pm. We headed around the sand spit and South East into rough water and head wind. It was hard paddling all day. We saw groups of manta rays, stingrays and dolphins and one small sea snake. As we got into the lee of Cape Rose, we paddled along the shore line looking for a suitable place to land and camp as an emu was nonchalantly standing in the water looking around. He wasn’t disturbed by our presence and eventually wandered off into the bush. The beach was quite steep and shore line consisted of sharp broken coral and big chunks of shells and rocks.  Those with fibreglass boats were reluctant to drag their boats up the shore so we took it in turns to hold boats in the water to unpack before carrying them up the beach.

Friday 20.4.12
We didn’t have far to go to get to Monkey Mia so we were a bit slow packing up on the last morning much to our detriment. The light wind at breakfast time built into a ferocious 22 to 25 knot head wind. I could hardly push the paddle into the wind. It didn’t take long and I was exhausted. I tried walking along the shore line for a while but I couldn’t go any further. It was decided Jo would stay on the beach with me.  I had had a bad cold before I left and it must have taken more out of me than I realised. The others struggled on to Monkey Mia hugging the shore to keep in the lee of the land for protection as much as possible.  When they eventually made it they met a nice young chap with an open aluminium boat with front loading ramp who had just off loaded a group of tourists from visiting the Pearl Farm Barge. He obligingly came and picked us up. Ben and Neesha helped load our fully loaded kayaks onto the centre consul and he transported us all back to Monkey Mia in no time. We were glad to see our vehicles waiting for us. With the benefit of hind sight we should have got the latest weather forecast the night before using the Sat phone or marine radio and left before breakfast before the wind increased in strength.
It was a great trip. Thanks to Judy for organising it. The company was great. Pleasant evenings were spent sitting around having dinner. We were mostly in bed by 8.30pm. With the stunning red cliffs and clear see-through water Shark Bay is such a unique part of the world.

The group were all strong paddlers. When they stepped on the gas Marg and Ben Toohey could go like a rocket in their double kayak which we nick named the Grey nurse.  Marg also showed she could paddle in rough water which she hadn’t experienced before. The two of them have walked the entire Bibbulmun track so were able to teach us a few things about packing light. It was the first trip for Jo and Sharna and they showed themselves to be very good strong paddlers. Ben and Neesha are strong paddlers and it was great to have their strength helping to get boats in and out of the water. Fortunately we did not experience low tide with a long portage to get to camp on shore before Cape Rose as we did the last time I did the trip.