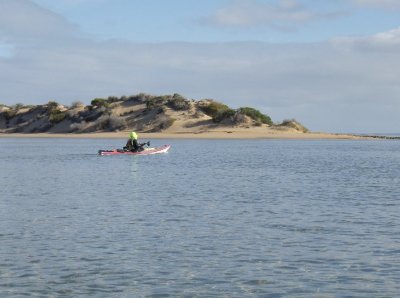 The journey north from Perth coincided with a severe weather warning as WA’s first major winter front passed through. Kevin & Ken nearly lost their roofrack on the journey north, but engaged “Heath Robinson” skills to ensure the critical load reached its destination. The team rendezvoused as planned in the Shark Bay Campground, where a 1 star cabin had been booked. Royd& Linda opted for the 1.5 star tent-outside-cabin accommodation option, as a mitigation measure against predicted snoring from un-named team member/s. The local pub provided a good meal and beverages assisting initial team bonding.

Saturday arrived as a cool and overcast but calm day. We drove down to the beach with my fear of the amount of time required to pack the kayaks shared by most others – Kevin of course had his kayak packed in a jiffy. We were on the water ~10.15am with a light easterly breeze and it was good to finally be underway. We could use sails for a short period until the wind died away altogether and we were blessed with stunning calm conditions. It was 20km to the first landing at the tip of Heirisson Prong which we achieved in 3.5hr. We had lunch and saw shovel-nosed rays and small sharks in the shallow waters centimeters from the shore. Ken was quick to cast some tackle in the water and this became a regular habit on the trip. We had seen little marine life on the route over, due to both the prior day’s storm and the cooler July water temperatures. We decided to make use of the excellent conditions and continued on a further 7km to camp on the end of Bellefin Prong. Both “prongs” are narrow north-south oriented peninsulas, comprising mainly sand-dunes. Older, lithified dunesand forms rocky platforms and low cliffs in places. We camped at the back of the beach with only a short kayak haulage required. It was a nice spot and warm conditions. Kevin confirmed our position with the ACRM base lady in Denham. First day teething problems followed ….. numerous sandflies came out to plague us but they preferred the ladies and disappeared after dark. Ken finally managed to work out how to put up his tent and sort out where he had packed the stuff he needed. Royd discovered he had brought the wrong fuel (Shellite) along for his Trangia stove when black fumes emitted from the burner and coated the kit with carbon that seemed to quickly get over everything and stuck. Linda was not impressed. Kevin remedied the disaster by providing a spare bottle of metho thus saving Royd from 5 more days of Linda’s wrath. We enjoyed a period around the campfire and listened to the Dockers footy game on Judy’s radio (nothing like getting away from it all!). Delicious cakes were produced by Judy and Helen (how do they pack it?).

Day 2 commenced with a nice sunrise and a light easterly breeze. We were on the water by 9.30am for the 9km paddle SW to Dirk Hartog Is. The wind turned to the NE and strengthened, such that we were able to use sails (except for anti-sail campaigner Linda who was normally in front anyway). Kevin detoured to score the weather forecast from a lone fisherman before we had early lunch on a pretty beach, we named “half-moon bay”. We then sail-paddled south along low rocky cliffs, enjoying great scenery. The highlight was a massive osprey nest and bird flying above. Our destination was the last big bay on the SE side of the island. The forecast was for ~20kn SW winds later in the day and through the next as a front passed through. We opted for the shelter of low hills at the southern end of the bay. Here, mosquitoes joined the sandflies for an all out onslaught on the ladies. The blokes did not find them that bad. Ken & Royd tried their hand at fishing in the bay. We had some modest success with a flathead and garfish that ended up cooked in lemon juice on the campfire later on. A pod of dolphins out in the bay entertained us in the evening. Wind and rain squalls started overnight.

Day 3 was consistent with the dismal forecast and it was a “no-paddle” day. We had intended to paddle around to South Passage and see Steep Pt etc that day. Instead we hiked overland, initially following a dirt track, then bush-bashed over to the south coast for views of South Passage, Steep Pt and Surf Pt from the dune tops. Dirk Hartog is not as stark as we were led to believe – there is plenty of vegetation, though no large trees. Wirrida (salt pans) occur in places. Dunes dominate the landscape and goats (soon to be poisoned by CALM) have caused considerable erosion of the dunes. A few wildflowers were out, including a nice red myrtle. Back at camp, it was time for more fishing. Helen quickly caught a bream from right near our campsite. After a couple of hours we had 4 bream and Kevin had caught a large flathead and a large bream from the far SE point. The wind stayed with us but it was hot and we could dry our gear out. In the twilight, Ken caught a small shark on a handline that Kevin had set. It was photographed and released. We had a 3 course meal around the campfire that night, followed by Royd’s quiz which Kevin ‘won’. People started going to bed earlier each night, so Ken & Royd were left to solve the world’s problems around the campfire when a rain shower sent us scurrying off as well.

Day 4: Kevin had us up early to ensure we got across east to Bellefin Prong, given the forecast easterlies. We were on the water by 8.05am and 6km into a mild headwind. A pleasant beach awaited us, with shrubs growing right down to the water’s edge. After breakfast, some of us clambered up the hill for the view. We spied mangroves to the south and elected to detour on a drift-paddle with the now northerly breeze pushing us lazily along. We saw lots of marine life in the shallow, clear waters – rays, sharks, bream, mullet and occasional turtles. We reached the end of a prominent point and could see out to South Passage. After a quick break, we paddled back up the Prong for 14km to our campsite in a small bay. Flat rocky ledges bound the bay and formed a platform for fishing. Royd caught a small flathead, then later hooked a shark on a very light line and inevitably lost all tackle after 10mins of playing the beast… Ken caught a bream. The fish ended up in the frypan over the fire later on as Ken continued re-counting his life story and dramas for our entertainment. A new moon lit the sky across the water on a calm and pleasant evening.

Day 5: After a cold and dewey night with brilliant stars, we had a leisurely start to the morning. We were on the water by 9.15am with a stiff, cool ESE wind allowing us to sail up the prong to our former campsite near the tip. We had a morning tea break and searched for Ken’s lost paraphernalia from the earlier visit. Ken tended to leave gear scattered around various strategic parts of Shark Bay…. We continued on and rounded the prong before paddling directly into a 12kn ESE headwind 6.5km over to Heirisson Prong. Kevin had us adopt a group diamond formation, in order to maintain communication and group strength in the event of the conditions worsening. This worked well and we practiced swapping positions in the formation. We reached our destination in one hour. We selected a camp just south of the prong tip and had most of the arvo to set up camp, lunch, then leisure in sunny, sheltered conditions. Kevin checked-in with ACRM in Denham and received a weather forecast of 13kn ENE headwinds for the following morning, declining only in the afternoon. Fishing yielded little catch with Helen landing one bream. The final meal for many was dehy. Ken’s life stories continued before we retired to bed.

Day 6: We awoke to a fine day and a light E breeze. We packed up for the final time and talked through scenarios should conditions turn rough for the 20km return crossing to Denham. We were on the water at 9.30am and after a warm-up, we started in a group diamond formation again with Judy leading us into an initial 12kn headwind. This soon lightened off to <8kn and decreased further. We paddled in loose formation and had breaks every 5km. Kevin taught us the phonetic alphabet en route and we played eye-spy to wile away the kms. 8km out from Denham, we entered into a zone of strengthening SW breeze and were able to put sails up for a lucky push home. It was great to reach land again after 3.5hrs sitting in kayaks and to safely conclude the trip. After unpacking gear into vehicles, we returned to the Shark Bay Campground via the bakery. The local pub provided us with a pleasant last supper together before we parted ways the following day.

We completed 105km of paddling overall and were quite lucky with the winds, apart from the one day the front came through. For me, the trip highlights were the great group camaraderie and the fact that we had this massive wilderness area to ourselves, with only a couple of fisherman seen in the distance most days. A special thank-you to Kevin for organising and for leading the trip with a balanced style that blended flexibility with safety. The voluntary ACRM base support in Denham was much appreciated.