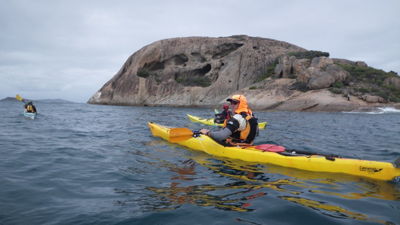 We left Martin’s house at about 7:45am having a lengthy discussion about paddle lengths then settled into a comfortable silence. After driving for 30 minutes, circumstances required that we take a little break for a short discussion on the method of securing boats to trailers.

On Saturday those that had arrived early went for an exploratory paddle in Lucky Bay – beautiful fine white sand that squeaked under your feet, between granite boulder headlands, with granite islands dotted across the horizon. We poked our nose outside the bay to feel the force of the Southern Ocean before heading back to camp. The afternoon was spent exploring our surroundings (the coastal walk offered stunning views and variable terrain), before waiting for the rest of the group to arrive.   The remaining tents were put up in the dark – 2 McMansion tents, 5 regular tents, and 3 campervans.

On Sunday the paddle was from picturesque Hellfire Bay around to Lucky Bay. Given the weather forecast was unfavourable for the remainder of the week we got a good turnout for what looked like possibly our only paddle for the week. We experienced quite “clapotis” seas with around 1m vertical waves in the open ocean. We were all ready for the pleasant break when we got to Thistle Cove. The decision was taken to follow the coast around inside the cove and some of us played in the shore waves.  Paul and I survived a larger than usual bongo wave that got the adrenaline running. I then caught a larger wave in the dump zone at 45 degrees and was duly capsized, and seeing a second wave about to break on me quickly separated from my boat. On reaching the beach I found I was missing my forward hatch cover. Bob followed me in while the others stayed outside the breaker line – no Bob, I was not worried about my hat , it was the hatch cover I was looking for. Bob radioed the group to report the problem, only to be met by silence. Shouting from the rocks was a more successful communication method and it was decided that Bob and I would carry our boats up a rather large boulder to be collected by car, while the remainder of the group paddled for home and then collected the cars.

Meal times at camp were always interesting as different culinary traditions were revealed. Bob believes any meal is enhanced by the addition of chilli sauce and pepper. Al opens 2 cans and combines the contents before heating. Paul learnt that a full packet of pasta is a LOT of food. Those visiting from campervan land brought exotic dips that require refridgeration. Helen makes an awesome fruit cake, reserved for those that have finished their dinner. Jane used vegetables and a knife (slight difficulties were encountered because the local kangaroos have learnt to use zippers and like lettuce and tomatoes). The variety of stoves were compared and then underwent non-rigorous scientific testing  – the jetboil was only slightly faster than Bob’s gas stove (yet Bob was heating about 4 times as much water).

Monday morning saw the creation of a new hatch cover, very sporty blue tarp with a yellow cross – thanks guys it worked well, only letting a couple of cups of water in over the next few days despite some harsh treatment.  The winds were less than forecast and we put in at our local beach and paddled around to Rossiter Bay – with two beach landings to practice our skills. This was the scene of a second popped hatch – this time only a pair of sunglasses was lost. Duct tape was duly added as a tertiary securing devise and on we paddled with a nice tail wind. In the afternoon I walked to Thistle Cove for some purposeful beach-combing; no hatch cover but an enjoyable coastal walk all the same.

Wind got the better of paddling on Tuesday, so we took advantage of it and used Martin’s kites – we all had longer arms as a result, useful for all those beach launches. Who can forget the “WhooooHooo” that Helen shouted as she felt the force of the wind in that kite. We then formed a convoy and drove along the beach to Esperance – where good coffee was enjoyed.

The winds had been too strong for Mary to paddle so Laurie and Mary left the group to find some inland water to paddle on. Bob had to return to Perth early as well, so our group was decreased for the remainder of the week.

Having watched the local wind patterns at Le Grand beach (yes those boulders do create their own local wind pattern) it was decided that Le Grand Beach was a suitable launch spot for the next morning. We paddled out with a tail wind exploring the small coves, conscious we may need this knowledge on the return trip.  Around the headland we had a breather in a rock bay before rounding another 2 headlands. This brought us to yet another pristine white beach – this one with the unique rabbit shaped rock at one end. There was debate as to whether we should continue to Hellfire bay or return to the cars, and it was decided to wait until we got to the headland to see how the wind was developing before we decided. Once we were there it was clear that continuing on was unwise so we turned back to Cape Le Grand. After rounding the last headland we had a full headwind and it was tough paddling. We took a second break on the small beach that we had explored on the way out. A tough, short, but enjoyable paddle. Kites were the appropriate toy for the afternoon.

Thursday it was decided to do some training exercises in Lucky Bay. There was a very friendly shore break in a small cove on the far side of the bay. Wolfgang did his first low brace on breaking surf – and Rod reports that it was textbook perfect! There was a dolphin feeding frenzy occurring at a small opening to the bay, which was fascinating to watch. Once we were near the campsite a number of people practiced their rolls. By this time we were long stay-ers in the camping area, so much so that the local kangaroo couple ignored us totally as they had a lunchtime romp.

With strong winds forecast yet again it was decided to pack up early and use the weekend in Perth to clean all that sand out of our boats and make some repairs.

Martin did an excellent job in planning the week, and which was enjoyed by all. Thanks also to Bob and Rod who provided instructor support along the way. Last but not least thanks to those whose company made the week so enjoyable.